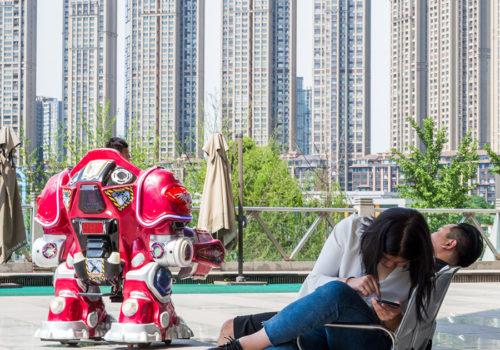 “Has my view of the world partly changed, given that for a while now I have been in contact with Chinese culture, which was once completely unknown to me? Suddenly my subconscious makes me discover new things and scenes in the streets from day to day and everywhere. It feels like I am in the middle of a fairytale with all its facets. Am I dreaming? Or has it got to do with reality? Is everything as it appears?

Already since Aristotle questions have been asked about the relationship between personal consciousness and reality. In his writings, the being as such is systematically named as “in such” (per se in Latin). On the other hand when it is a matter of our consciousness, things appear “for us” or “for one” in their subjective envelope. In Hegel’s dialectic the concept of “in and of oneself” is akin to a fusion, an amalgam between being and appearing, between being relating to oneself and being opposed to oneself. A dialogue between them creates the bond to arrive at a whole.

In my “In and of oneself” work I am above all interested in this bond: my inner dialogue between dream and reality, inner and outer, being and appearing. My curious inner squirrel thus tries to question itself about what it encounters daily.

What does he see in street scenes day after day? He probably notices only the “seeming”, only these outer envelopes that are clothing, facades and ordinary objects. But a squirrel observes individuals and the things it meets from different angles. So, the clothes and things used “for themselves” in a creative way also seem to say more about people “in themselves”. My photographs nonetheless will have a hard time giving me answers; they will rather be an integral part of the dialogue between my dreams and reality. And sometimes I’ve got to pinch myself. Yes, it is real “in and of itself”.

Torsten Schumann is a German photographer who has recently been living temporarily in China. The central aspect of his artistic practice involves everyday situations and objects encountered in urban space. The artist engages with his own fascination and puzzlement resulting from close observation of detail. His unbiased curiosity investigates the question: Why and to what purpose are these things created? In Schumann’s own words: “Photography helps me question the ordinary. The more I do this, the more I see the world as an enigma.”

Schumann’s work has been exhibited internationally and has won multiple prizes, including the Arte Laguna Prize, PDN Photo Annual Award and the OPUS Magazine Photo Prize.

More Cars, Clothes and Cabbages was published by Peperoni Books in 2016. Schumann’s work is part of art collections as of the Musée de l’Elysée in Lausanne and of the JPMorgan Chase Art Collection New York.