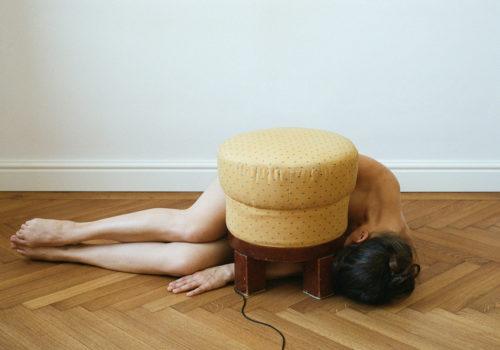 The fiVe artists collective of Vienna reveals the visible and the invisible, jostles habits and redraws borders. It presents current themes by pushing them to the extreme or handling them with subtlety: urbanization, climate change, the environment, migrations and the role of women.

With Concrete Paradise Barbara Filips develops fantastical dream-like images where the frontiers between reality and function grow nebulous in various fantasized settings. She plays with utopias and futuristic dystopic visions.

Regina Anzenberger also fuses reality and fiction through painting and drawing. Shifting Roots speaks about origins, the need to follow one’s road, endings and beginnings, permanent mutation, the succession of generations and the course of life.

Martina Stapf strives to show and not show and trace the frontiers between the Seen and the Unseen via the female body that vanishes behind, under and into various objects. A viewer’s attention almost automatically focuses on the non-visible and desirable female body.

New frontiers and news spaces for Eva-Maria Raab in Re-turning Around. Travelling to Ithaca with light-sensitive paper, she captured the waves of the sea at night, then created geographic maps with gold highlights. She redefines topography and geopolitics by evoking The Odyssey.

With Auf der versteckten Seite des Mondes (“On the Hidden Side of the Moon”), Gabriela Morawetz suggests the idea of fictive outer space. Faced with our precarious life on earth, can we find solutions in the distant cosmos?

fiVe, these four women also temporarily invite another artist of Austrian or foreign origin, with the aim of broadening the spectrum of photographic creation. This time it is Gabriela Morawetz.

Regina Anzenberger
Born in Vienna where she still lives. Regina has been painting and photographing since she is 13.
Publications receiving international awards: Roots & Bonds, 2015; Goosewalk, 2019; Shifting Roots, 2020; Gstettn, 2021

Barbara Filips
Born in Vienna where she still lives.
2016, Degree in applied and artistic photography from Prager Fotoschule Österreich. Exhibitions in Austria and internationally.

Gabriela Morawetz
Born in Poland. The Academy of the Beaux-Arts of Cracow. Lived in Venezuela from 1975 to 1983 and has lived in Paris since 1983. She has exhibited in numerous galleries, museums and institutions all over the world.