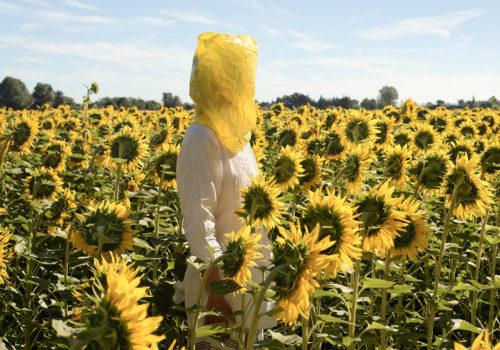 Some images are overloaded with stories, so heavy with narrative that they are left to peacefully spread over the world. These images flow, and when gazing at them, we are swept up in a flood of possible words and hidden worlds. There is a certain magic in passing through these images; we fly from one space to another without ever knocking into one another because there are so many things to say, fill our ears with song and dazzle us with landscapes.

A Finnish videographer and photographer, Elina Brotherus ceaselessly plays with the rules of this game which could also be written as “me” and which tirelessly passes from the word to the eye, from the eye to the poem, from the poem to everything within the frame that can laugh silently. Elina depicts herself in her

photographs by working on mise en abîme as much as on derision. This way, she travels lightly from autofiction to gazing over the landscape, from reappropriation of art history to formal invention, blending still and moving images. So yes, Elina Brotherus’ work tells stories that are like neglected fairytales. The fable of a red ball

caught in flight for Baldessari Assignments (2016) or the solitary women at Maison Carré (2015 – 2018) and the eternal tale of the artist and their model that she shapes in abundance by splitting herself in two. In Elina Brotherus’ stories the image is always on the edge of a forest where irony and melancholy stand kindly side by side. There is gentleness in this gaze, something that makes the banal expressions of existence feel like a novel.

This silent novel is also like an echo in negative in the play of Sara Imloul’s staging. Sara, a young French photographer, builds pictures in black and white, always re-interpreting in a slightly crazier way what the surrealists were working on in the 1920s. In

Passages, simply by their positioning, she dives into contemporary archeology by installing objects that relate the mad mysteries of everything no one sees. Rather like Brassaï she reinvents signs by taming them within the contours of her frame: the infinite editing of shapes, relay passage from what we see to what we might see if only we allowed ourselves time for magic. And there is so much magic in these history-filled images, those which reroute reality to better hear its laugh.

Sara Imloul is a French artist photographer born in 1986.

Since 2008 she practices symbolic and autobiographical photography by striving to set in darkness these blacks and whites of inner visions born from memories.

After training as a photographer at ETPA, Toulouse between 2008 and 2011, she invents personal techniques in the darkroom that enable her to set her mysterious world in images through a process from the earliest days of photography, the calotype (patented in 1841 by W. Fox Talbot, a technique making it possible to get a paper negative).

In 2019 Sara Imioul was awarded the Levallois Prize. She has published two monographs with Éditions Filigranes: Passages in 2022 and Das Schloss in 2014.

Elina Brotherus, based in both Finland and France, works with photography and moving image. Her work has been alternating between autobiographical and art-historical approaches. She often uses herself as a model. After her early self-portraits, Brotherus focused on the relationship between the human figure and the landscape and, later, that of the artist and the model. In the series Annonciation (2009–2013) and Carpe Fucking Diem (2011–2015), she returned to autobiographical imagery. Her recent performative work is informed by the art of the 1960s and 1970s, including the Fluxus group and conceptual art.

Elina Brotherus first began exhibiting in the late 1990s and her work has since then been shown extensively both at home and internationally. Brotherus is represented in over 60 public collections and has published 11 monographs. One of her many awards is the Carte blanche PMU, in connection to which she became the first Finnish artist to have a solo show at Centre Pompidou in Paris.