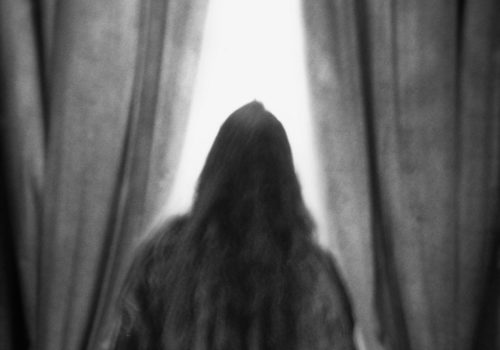 Colette Pourroy unveils the 4th part of her family saga, which will be presented during the first week of the Rencontres d’Arles, with the simultaneous publication of the book L’ombre de Kate, published by André Frère, and an exhibition L’ombre de Kate, from 22 black and white photos, printed by Andres Romero.

The Absent Face by Fabien Ribery

In the beginning there was darkness, then hollowness, then a blinding light, and then nothing.
In the beginning there was destruction, a vanishing body, a fading face.
In the beginning there was art, which for its creator is the tale of an impossible, lost, and forbidden gaze.
A baby, on a train station’s platform held tightly by a mother to her heart, a father returning to war in 1916 after a short leave granted for the birth of his child, then an explosion, disaster, death.
This man denied is the grandfather of Colette Pourroy, whose stricken son, bereft of words, became mute.
Only silence was inherited, that which unites in separation, and the pain that led a widow at the age of seventy-three to commit suicide by drowning, her mouth filled with the deadly water of the history of crime of the century.
The camera of her granddaughter that never ceases, book after book, to question her family’s genealogy, is a ghost manufactory, an echo chamber for those words that were never spoken.
A notebook lies open on the worn upholstery of a chair, the writing is still visible, but the names are covered in soot.
In her inner dialogue with the unspeakable, Colette Pourroy seeks answers from the abyss.
One never creates alone, but rather with the specters that surround and press us, with the melancholy that chokes us and begs to be torn, along with time that generates mountains of cadavers just as surely as could an alembic still.
In the trembling of what emerges, the clouds or the vapors, the powder trails or concretions of dust, one can perhaps glimpse the features of that one who was disfigured.
The artist is a passe-muraille, her forehead pressed against a wailing wall built by the innocent.
Doors, porches, archways, corridors, and hallways.
Veils, canvases, and windows.
Black suns, lampshades, and candles.
One can pray, following the paths of light and thereby cleanse oneself, or accomplish all of this, all at once thanks to the medium of photography.
The grandfather, who had been an engineer and a sculptor before he became a soldier, defeated at age 29, two months before his death had sculpted a paper cutter in the shape of a munitions shell topped with a four leafed clover engraved in gilded brass.
Faithful to her ancestor, Colette Pourroy replays the signs of fate with the 22 tarot cards of her photographs, invoking an exorcism to transform evil into discrete illuminations.
From the roselike vortex of crumpled sheets a hosanna of hope rises.
Fabien Ribery

Colette Pourroy lives and works in Paris and in Provence.
After attending the Ensad in Villa Arson, Nice, she specialized in graphic design and photography.
She worked for 30 years with editors in Paris as a freelance artist, before devoting herself to photography in 2008, as author.
Starting in 2003 she began regularly participating in exhibitions, principally in Paris. Her photographs are currently part of public collections at the Richelieu site of the BnF, at the MEP, and in private collections both in France and overseas.
In 2013, the IRIS Center awarded her the Caféfoto prize, with a solo exhibition on her father (family saga #1). Télérama published an article full of praise about this prize.
In 2014, she was selected in the Mois de la Photo in Paris (Au cœur de l’intime), for her series Couple, with a solo exhibition at the Little Big Galerie. Numerous articles covering her work appeared in various media outlets.
In 2015, the Mind’s Eye Gallery (Paris) held a solo exhibition of her work “ Espaces intérieurs “.
In 2017, her work was displayed by André Frère Éditions at Paris Photo in the Grand Palais, for the publication of Ève réincarnée on her sister (family saga #2) and also at the Mind’s Eye Gallery.
Since 2018, Récurrence Photo has presented her series Couple on its site.
In June 2019, on the theme of “The Father Figure” she was selected for the 41st Estivales photographiques du Trégor (L’Imagerie gallery, in Lannion) with twenty photographs on her father (family saga #1).
In July 2019, for her series Mother (family saga #3) she was selected to be exhibited at the Huit Arles gallery, at the Rencontres Off, on the occasion of the release of her book published by André Frère Éditions.
In 2022, the series on her grand-mother (family saga #4) will be exhibited in Arles, on the occasion of the release of her book published by André Frère Éditions.
Colette Pourroy takes unretouched analog photographs. Using an enlarger, Andres Romero prints her images on matt baryta paper.