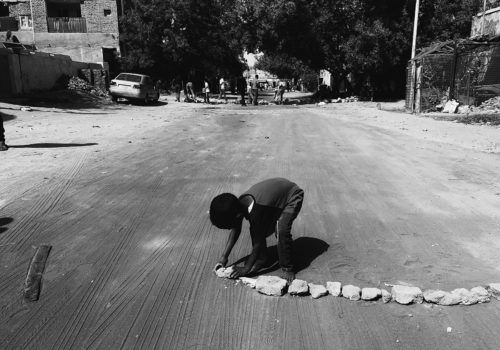 An exhibition at the Rencontres d´Arles recounts the first milestone of a revolution that is taking place in one of the largest countries in Africa. While the challenges are immense, the cornerstone for change has been laid, the one shown here, with photographs of protesters taken sometimes at the risk of their lives.

If there are stars at the Rencontres d’Arles this year, it is in the eyes of these Sudanese who took to the streets in the spring of 2019 and, as if caught in a revolutionary trance, organized a huge sit-in which made it possible to oust the dictator Omar al-Bashir at the head of the country for 30 years.

It is not the price of bread or gasoline, nor diplomatic or external pressure that are at the origin of this colossal protest movement, but the sudden refusal to accept for one more second an inhuman political system. , the terror maintained by the power that no one wanted anymore. This is what Ula Osman, 22, who has known this denunciation on every street corner and these police officers disguised as civilians who immediately arrest you for an unpleasant word about the regime as the German Gestapo did in the past. and the Soviet NKVD. Today, this young woman with soft and lively eyes, is both a photographer and a member of the current government of her country. She is one of the artists invited by the festival and this is the first time she has set foot in Europe in her life. She thinks Arles is beautiful, but regrets that the little attentiveness to what happened in Sudan.

According to her, it all started with reaching a deep saturation point, especially among women. For example, they were not allowed to travel with their children without specific permission from their husbands and had to agree never to see their offspring again in divorce cases. The voices of these battered women have started to rise in the streets at certain times of the day to call for people to come together and say no to a system that crushed them, humiliated them and prevented them from living like they are.

In a few days, large crowds gathered in Sudan and a human wave swept over Khartoum, the capital, to demand the departure of the dictator. It did not take a week for him to be driven out and an uncertain period of change, both brutal and far-reaching, with the gradual advent of a new society began. During these sit-in days, in a large district of the city, many people invested the scenes with magnificent creative energy, to discuss the future of the country, the developments to be made, what they did not accept. more. The country is a huge body looking for a future and operating a radical transformation. Each individual could rethink the world and their life in the light of seeing the existing dictatorship suddenly fall.

Song of the poets

In the exhibition, a film by Hind Meddeb – also author of the texts – delivers fascinating accounts of this extraordinary period, such as that of this woman in her forties, with a veil on her head, sitting on the floor. , telling a friend to have seen an imam driving a superb luxury 4×4, the same one who gives painful sermons in which he considers immoral the behavior of women who demonstrate for their rights. She wonders how a man who is supposed to be pious and embody the religion of his country is just a religious hypocrite who preaches to others what he cannot even apply to himself. The liberation of the Sudanese comes from the reinvestment they first made with words, their speech became free again, and their gaze was freed from by the deceptive appearances of a terrifying power.

After the cry of the women, soon the song of the poets, the handwritten messages that are inscribed on the walls and the T-shirts, on the foreheads also, while one walks on the streets and the railroads, words which were hurled like an invisible javelin stronger than all lethal weapons put together. Strong with the hope that it carries and offers  incessantly, even when morale dropped or anguish arose still threatened by the army and the fallen dictator’s followers who schem in the shadows to stifle the movement.

In Arles, the photographs are there to show the world that this is not the case, that even in this country so little known, caricatured, so little listened to by the international community, there is a fire for an uprising in people’s hearts. and the abdication of a regime that has for too long injured and killed its citizens with impunity. When, on the verge of tears, Ula says she saw in front of her a student being stabbed in her university for only daring to express his displeasure, we understand how powerful the wave was that chased the dictator who was responsible for it.

These 57 days of sit-in documented here, in the exhibition, show a newfound freedom of expression, like a new bird that would have landed in the center of the country and would cover with its wings the whole of a lonely territory, where eyes full of hope finally allow themselves to look at the sky and the horizon.

In Arles, some say they were disappointed by the exhibition for the reason that they did not find in the photographs exhibited a stylistic audacity or an enticing aesthetic. But if the visitor accepts that photography is first and foremost a gateway to a serious, complex and fascinating subject, he may be amazed. Also thanks to the formidable pedagogy deployed, in particular carried out by one of the curators of the exhibition and photographer Juliette Agnel, who, on the occasion of a personal project in Sudan, perceived the need to bear witness to this ongoing revolution and did everything to make this meeting with Sudanese photographers possible. In a few simple sentences, without making any shortcuts, the exhibition manages to sum up a situation so difficult to understand when one knows little or nothing of the political history of this African country.

This is why it resonates as a salutary act which can make those who walk it grow.

If it rings strangely next to exhibitions focused on a single aesthetic, conceptual or historical proposition, it shows perhaps better than any other that art is first and foremost the personal expression of every being and that it is beautiful when it suddenly springs, when it comes from people who have been silenced by terror for so many years and one day dare with heroic courage.

This energy, these standing hearts, these girls who were living through ordeal and suddenly stood up, Ula dreams of solidifying them and building them up little by little for a better tomorrow. Nothing is won yet. Sitting in the lounge of a modern hotel on the edge of the historic center of Arles, a little away from the hustle and bustle of the festival and the magnificent stone buildings, she sums up her vision by explaining that it takes time and that this country must be taken care of like a newborn baby. For her, the 57 days of spring 2019 are a birth. She would like to say that enormous steps have already been taken since then, such as the ban on female circumcision or the creation of a government drawn from civil society. There is, however, a huge challenge. Currently, since this protest movement, the country is ruled by two entities. Not only this government, but also a military committee governed by a henchman of the former dictator, a man deemed extremely cruel and suspected of crimes against humanity, the so-called Hemeti.

It was he, along with his armed men, those called the Janjaweed, the “demons on horseback”, who put an end in the blood to these 57 days of sit-in, on June 9, 2019, the 29th day of the Ramadan. At dawn, while the daughters and sons of the officials had returned home for the religious feast, while there remained only the orphans of the streets, the poor, the fragile women and the precarious men, a flood of militiamen entered the scene, shooting people with guns, injuring and killing some, then throwing the bodies into the city’s river.

It is impossible to know the numbers of  the massacre of the 29th day of Ramadan, surprising all the population and those who are interested in the fate of the country in the rest of the world. These hundreds of dead are the martyrs of a first great blast of air, that ended 30 years of dictatorship and opened the door to all possibilities. If the current signs remain diﬃcult to read, if many observers are not very optimistic, if rape is for example still practiced as a weapon of war and terror in certain parts of Sudan, notably in Darfur, if the military committee remains in place and continues to create a climate of anxiety, Ula firmly believes that everything is starting to change anyway. The first big step was  in December 2020 the cancelation of the status of “country supporting terrorism” applied to Sudan by the United States and which until then prevented the country from being open to part of the global financial system.

“Don’t give us money, but invest! Is one of the slogans of the new civilian government that Ula likes to share.

While waiting to be able to travel more easily there, it is possible to read and feel the beauty of the Sudanese culture as well as its revolutionary fever in this major exhibition, starry sky when we are in search of otherness and of human transformation and that we want to see eyes riveted to a dream.