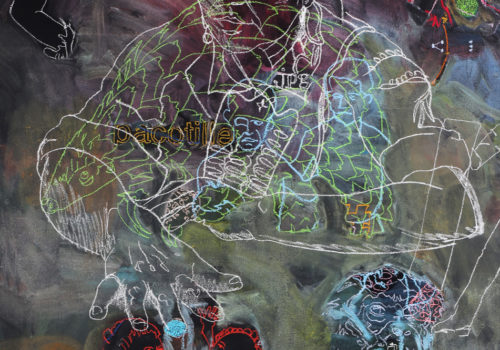 His name Nicolas Havette: he was the artistic director of the Ortiz foundation and the curator of its exhibitions!

He resigned a few weeks ago and it is as a photographer that he returned and is exhibited today!

It is through a hybrid form at the crossroads of performance, photography and drawing that Nicolas Havette realizes his work entitled FORTUNES, in tribute to Robert Desnos: “if I manage to have the same freedom with the images as Desnos had with words, I would have succeeded in creating a (f) useful language ”. A follower of unrealism, which remains entirely to be defined, Nicolas Havette presents here a set of works produced in a participatory manner during his last residencies in Penang, Pouliguen, Arles, or even in Taipei or Pietrasanta …

Nicolas Havette is in a way carrying out the work of an anthropologist through the creation of a collective and participatory plastic work. It leads to the creation of complex representations of territories seen and drawn by its own inhabitants. What he calls, in opposition to the Euclidean perspective, largely dominant in photography and the representation of the anthropocentric world, the participatory perspective. For this, within the population who live around his workshop, or place of residence, he creates heterogeneous working groups, bringing together different generations and different social backgrounds during collective drawing sessions. During the creation of a fresco, the participants bring their images made for the occasion or collected in their archives, family albums, mobile phones, or even in the municipal archives and other local official collections… The images are then projected using a video projector on the walls of the space previously painted in black (which is reminiscent of the idea of ​​the blackboard, of exercise, of learning a language). There, while drawing the projected images, using chalk, pastel or Posca, the participants share their points of view, their experiences, their words, their journeys. Throughout the process, the artist and the participants take pictures of what is unfolding before their eyes. When the wall is saturated, part of the drawing is erased so the fresco can continue. Only the memories of the moments spent together and the photographs taken during the realization of the fresco remain.

Here, at Croisère, Nicolas Havette using the poems of Romeo Fratti begins an IN SITU work which will unfold slowly until the end of the exhibition at the end of September. You can follow the development of the drawing by subscribing to the account: fortunes.poesie.vivante on Instagram. The artist is also currently in residence at Zone Sensible in Saint Denis with the support of the CG93 and during the summer of 2021 he will create a FORTUNES with the companions of Emmaüs Arles with the support of the DRAC PACA, workshops of the Rencontres d ‘ Arles and Agir pour le vivant. The result of this work will be exhibited in the outdoor area of ​​Croisière during the opening week of the AGIR POUR LE VIVANT festival.

In partnership with the Méjan association and “Agir pour le vivant”

From June 4 to September 26