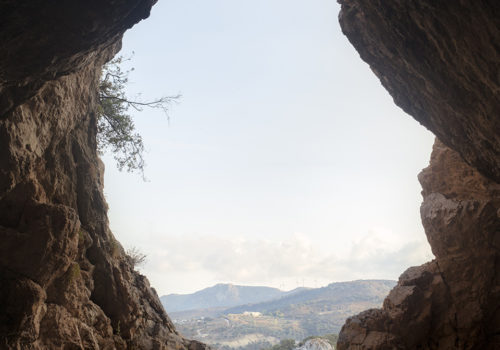 In 2015, Lesbos became home of the largest population movement in Europe since World War II. Yet this is not an unprecedented event in the turbulent history of this Greek island. Since Antiquity, waves of migration have followed one another on this piece of land at the crossroads of worlds, a passage between East and West. Located just 12 kilometers off the Turkish coast, the island still bears the traces of the Great Catastrophe of 1922. Following the defeat of Greece against the young Turkish Republic of Mustafa Kemal, more than a million Greek Orthodox from Asia Minor were deported to the other side, 45,000 of whom landed in Lesbos in the greatest poverty. Almost a century later, their descendants came to the aid of modern-day refugees, so much so that the inhabitants of the island were nominated for the Nobel Peace Prize. It is from this point of departure that Agathe Kalfas and Mathias Benguigui produced, between 2016 and 2020, Les Chants de l’Asphodèle, a four-handed work combining texts and images, which endeavors to take a new look at this high profile territory. depending on their stay, events followed one another and tensions rose: the wait for the refugees is interminable, months or even years; economic hardship and a sense of abandonment take hold in the Greek population. The exiles of yesterday and today can be observed, but the dialogue is broken. Navigating to the frontiers of documentary and fiction, this in depth work invites another reading of contemporary Lesbos issues, by bringing together traces of the past, mythology and the collective memory of migration.

MORIA OR THE FIELD OF THE ASPHODEL – text by Agathe Kalfas

I don’t remember how long I have been walking aimlessly in this landscape of ruins. The remains of metal sheets, molten plastics and all kinds of life debris crunch under my feet. Metal structures and a wooden door still stand. Scorched and starving tree trunks stand out from the stained earth. Under a tarpaulin marked with the UNHCR logo, I can see, buried, the bricks of a bread oven covered with soot. Deep in my tight chest, my heart crumbles, which will soon form a small pile of ashes at my feet.

Barely two months ago stretched among green hills of olive trees the camp of Moria, a strange tower of Babel made of odds and ends, teeming with hope and misery. All it took was a few sparks at the bottom of a hut to ignite the fire which, by I do not know what divine intervention, claimed no casualties among the inhabitants still asleep. The gigantic blaze swept away everything, wiping out the meager possessions of the thousands of people parked here. Up to twenty thousand women, men, children, of more than seventy nationalities, have remained in Moria for months, years, leading an existence without object, condemned to an eternal standby, as are the souls in the Field of the Sea. ‘Asphodel, the mythological hell of those who have committed neither crime nor virtuous action.

Above the continuous blowing of the wind which dispels the acid and carbonaceous smell, I still seem to hear the hubbub of the crowd going about their business. I can smell the spices from a simmering bowl. Two women are chatting while hanging out clothes while others are busy cleaning a tent and shaking rugs. Men are smoking while waiting in line at the barber. In the sky, colorful kites float as in a festive air. I hear a hoarse meow at my feet and suddenly the vision fades away. I’m no longer alone in the kingdom of shadows, which seems to please the ash gray cat who rubs against my jeans, purring. A few meters away, I perceive another movement in the backlight. This is a young woman crouching down, she searches the ground with a branch and deposits in a plastic crate some things that the flames have spared. I approach the rubble of what must have been a school, avoiding stepping on the charred papers, pieces of pens, lint, fragments of a blackboard… She looks up and we look at each other for a long time without saying anything. I decide to squat down next to her and together, tacitly, we fill the crate with what can still be used. Slowly, the winter sun gives way to half-light. She gets up and grabs the rope carefully attached to the box, now full. She makes a final gesture towards me before hitting the road, dragging her collection behind her to the sound of a scrape that follows the rhythm of her footsteps. She leaves the kingdom of the dead, the camp of Moria, warehouse of the unwanted souls, banished to the outer limits of Europe.