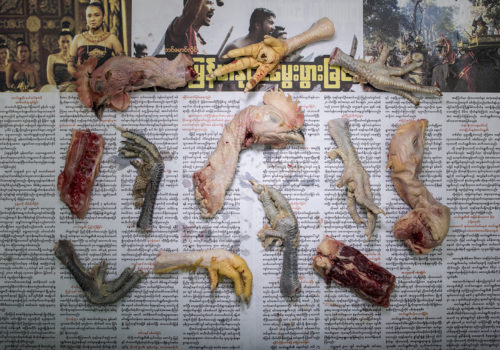 Poverty, in its universal nature, seems immediately understandable and yet, as a global problem, its solutions remain eminently complex.

To illustrate what it means to live below the poverty line, Chow and Lin, inspired by the work of Esther Duflo, traveled 200,000 kilometers from 2010 to 2020, thru thirty-six countries and territories, on five continents. In local markets, they bought vegetables, fruits, starches, protein foods and snacks, all that the poverty line set by each government allowed them to acquire. They then photographed each of the foods displayed on a page of a local newspaper purchased the same day. Using photographic typology as their tool, they carefully calibrated the lighting and the shooting distance in order to favor a certain uniformity over time and geographical distribution.

They then embarked on an economic comparison between countries and selected nine foods available in most of the economies mentioned, thus illustrating the globalization of production and variations in prices and consumption.

This study is enriched by two essays written by three European economists to shed light on the definitions of the poverty line: John Micklewright, professor emeritus at the School of Economics at the University of London, Andrea Brandolini, director of the Economics research laboratory and Statistics from the Italian Bank, and Lucas Chancel, co-director of the World Inequality Lab at the Paris School of Economics.

Armida Salsiah Alisjahbana, Secretary General and Executive of the United Nations Economic and Social Commission for the Asia and Pacific region, also explains to us the challenges of the sustainable development program for 2030, the first of the seventeen goals of which is to end poverty in all its forms.

The core of the artistic work of Chow and Lin, winners of the Luma Rencontres Dummy Book Award Arles 2019, is based on statistical, mathematical and computational methodology, which they have applied since 2009 to global problems.

An eponymous exhibition will take place in the Jardin des Voyageurs from July 4 to September 26 during the Rencontres de la photographie in Arles 2021.