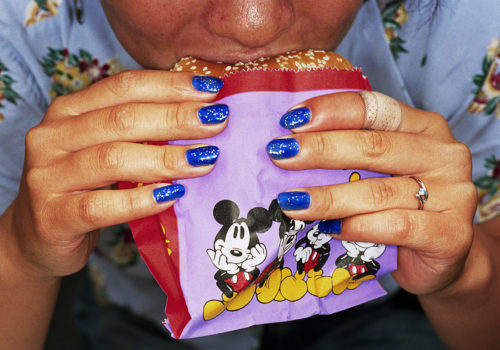 Street photography – the art of capturing the unexpected, the singular and the extraordinary in public space – has been part of Magnum‘s DNA since its creation in 1947.

To understand the original link that unites Magnum to street photography, we must return to the figure of Henri Cartier-Bresson, who, with the first appearance of the Leica portable camera, guessed that the photographer can now get involved with the human flow and bring back never-before-seen images.

So we see him in his early twenties, running around Europe and Mexico with a new Leica mounted with a 50mm lens, taking the snapshots that are today considered to be the founders of street photography – some of these rare early masterpieces appear in this book.

Stephen McLaren, himself a photographer and author of the book, make a new selection with the agency’s photographers of the often unpublished shots, and shares with us their experience as street photographers. This immersion in the agency’s archives allows us to understand the evolution of the genre from its creator and his peers, such as Sergio Larraín and Bruce Davidson, to contemporary photographers, such as Carl De Keyser, Peter van Agtmael, Trent Parke. , Alex Webb and Newsha Tavakolian. Magnum being above all a collective of photojournalists, it is not surprising that their best street photographs are often made while working on news report.

In his interview, Christopher Anderson pays tribute to great street photographers such as Harry Gruyaert or Sergio Larraín, while providing valuable information on their practice. Olivia Arthur discusses her relationship to fiction and explains how her imagination allows her to document a city like Dubai, while Raymond Depardon relives with us his first reportage in the United States.

Magnum and Street Photography is a collection of reflections on the profession and, quite often, on the behind-the-scenes history of current events as seen by some big names in photography.

Seven major themes allow a transversal reading of street photography (Free time, On the way, Shopping, Views of New York, Paris, London and Tokyo) and invite us to survey places of contemporary history, in the footsteps of great street photographers.

Stephen McLaren has been a Scottish freelance writer and curator since 2005. Prior to that, he was a television producer and director, working on documentaries for several UK channels. He lives in Los Angeles.

An eponymous exhibition takes place at the Actes Sud bookstore from July 4th to September 26th on the occasion of the Rencontres de la photographie in Arles 2021.