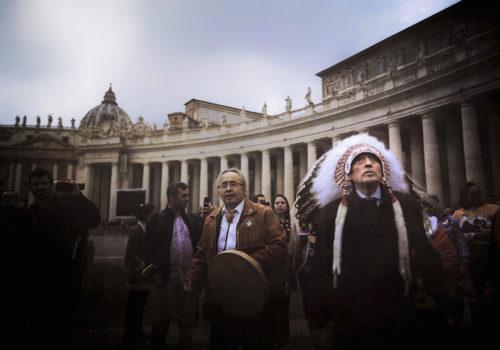 ”The Long Way Home” is a story of deep survival. In early April 2022, various delegations of Canadian Indigenous People traveled to the Vatican seeking Pope Francis’ apology  for the terrible abuses they suffered in the church-run Canadian residential schools.

When last year, archeologists found about 200 bodies in unmarked graves by one of the schools, attention violently went back on what is considered one of the most shameful chapters of Canada’s history: from the 1880s through the most part of the XXth century, more than 150.000 indigenous children are thought to have been forcibly taken from their parents and interned in the so-called residential schools with the aim to ”assimilate” them and ”christianize” them by severing their ties with their parents, community, culture, language and tradition.

It was quite something to see members of the First Nation, Metis and Inuit peoples, proudly dressed in traditional costumes,  waiting quietly under St.Peter’s colonnade for their leaders to come out after meeting the Pope.

Centuries before, in the mid 1600s, when the nearly 300 massive columns that make up the colonnade were being erected according to the revolutionary project of Italian baroque master Gianlorenzo Bernini, on the other side of the ocean, France and England were competing for the colonial domination Canada, sending colons, spreading disease, expropriating land. As Bernini was building a colonnade meant to symbolize the embrace of the church for all the world’s people, for the Canadian indigenous people a tragic history of violence at the hand of the Europeans was starting and would eventually lead to the creation of the residential schools for ‘savages’.

Under those columns, four centuries later, history had come to a moment of reckoning.

The Pope – during the meeting – spoke the three words these people had been longing for for decades: I am sorry.

This was the main lesson of these days I spent with the Indigenous people at the Vatican. Most of them had come out from the residential schools lost and destroyed. Then they reacted, and started reconstructing themselves by going be back to the roots of their identity, culture, and language. They kept it alive like a lit candle in wind, against all odds, against history, state violence, colonialism. And they kept it alive in the strongest possible way: in their being, inside themselves. They became a stronger version of exactly what the residential school system wanted to erase.

They have more than survived.

And this is also a lesson to the perpetrators of violence and bullying. As we see in other cases, their attempts can trigger a reaction that makes the victims stronger and lead to the opposite result of what they had intended with their aggression.
Antonio Denti