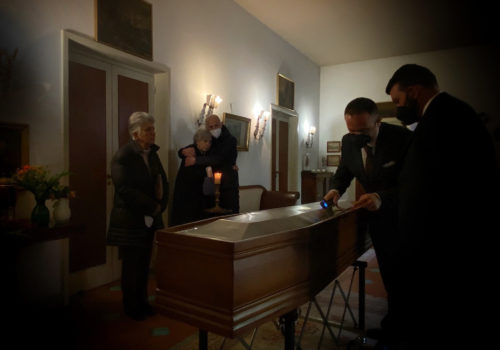 Dream of the Rifle and Shape of the Heart

Dream of the Rifle and Shape of the Heart”  is the photographic account of an unexpected journey I did back to the house where I was born and which I left at the age of fifteen. This journey happened in the wake of two apparently unrelated events which followed each other by less than a week: the death of my grandmother, Ina, at the age of 98 and Russia’s invasion of Ukraine with the subsequent return of the specter of war in Europe.

In this week of February  2022 my life made an abrupt leap forward, the full sense of which I am still very far from understanding. The two events – so close in time – combined and blended in mysterious ways. In the days immediately following that fateful week I dreamt – or maybe just visualized – myself holding a rifle.

I do not know if this is right. I do not know if it is wrong. But I did. Born in Western Europe at a time and in a place where perpetual peace was believed to be an achieved conquest, I had never really thought of war as real a possibility. There were wars, but elsewhere. Here there had been war. Both my grandparents had fought it. But it had been so bad that we thought the lesson had been learnt and all the antidotes were in place.

My grandmother, Ina, was born in 1923. For the largest part of her life she had lived in the house by the sea where I was born and grew up. In that house, in February of 2022, she died peacefully in her bed, like a candle that goes off in the wind. Up until that moment, she had been a pillar in the life of her numerous descendants and that house had been the centre of her our family life. Even if many of us had left it and lived scattered around the world.

Now that house, the one that I visited with my wife and son when I took the pictures that make up  Dream of the Rifle and Shape of the Heart, will be no more. When the paperwork will be ready, it will be demolished and the new owners of the land will build a condominium of apartment blocks.

As I walked through the large rooms of the house, looking at the furniture, the paintings, the pictures that I had always considered to for ever, thinking  that very soon even not even the concrete walls would be there anymore, it was impossible not to think about the destroyed houses and the thorn apart memories I was seeing everyday in the pictures coming from Ukraine.

But my thoughts went further. I have been a news cameraman all my life. Now, for more than twenty years. I have traveled a lot and seen a lot. I have seen wars, disasters, earthquakes, riots… But it was always the life of others. I always had that peaceful, stable, ancient house by the sea to come back to. Now, something had changed. Now it was my life.

As I watched my grandmother lying in her coffin as if she was sleeping, as I saw my father – for whom Ina (my mother’s mother) had been like a mother having he lost his parents very young – with tears in his eyes for the first time in my life, as I saw my son watching the lush garden from the same dark room and from the same window from which  I had done the same so many times at his age…when I felt these four generations still in that space for the last time, going through a momentous acceleration of their lives… then, my thoughts went further.

I looked at that house, that city, those people – all so familiar – with different eyes. As if for the first time.