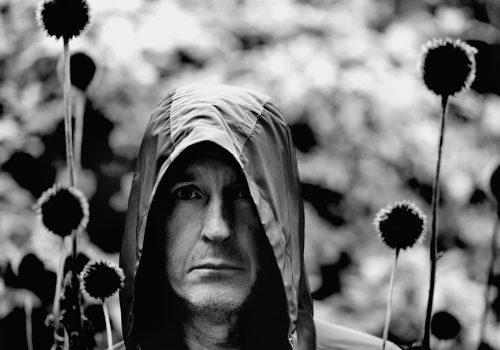 Anton Corbijn has a gigantic retrospective in Knokke and a book published on this occasion. A word about this article. We were only able to get 3 real photos, the rest being installation images. The result is not good. With 3 images, in a paper magazine, you can make a masterpiece and in particular 3 double pages. There isn’t much you can do on a site! But the quality of the text by John Devos made us want to share it with you.

Anton Corbijn is a discrete almost shy man, he doesn’t brag, speaks in a low voice and weighs his words, as if he doesn’t want to be noticed. He says everything, who he is, how he photographs can be traced back to his youth and upbringing.

He was born in a small rural village south of Rotterdam, in what is known as the Bible Belt of the Netherlands. His father and many other male members of his family were pastors. Life was strict and simple, on Sunday everybody dressed in black. Religion was omnipresent, but his father’s congregation was not even orthodox enough for some villagers adds Corbijn smilingly, they promptly founded their own church and doubled the hours of Sunday prayer.

In his adolescence, his parents moved to the central Netherlands to a more urban community. Then Anton disconnected, by dressing differently and by diving into the music scene. Around 17 he started to photograph, he became aware that ‘clothing’ is a means of identifying and communicating. He disconnected, but didn’t cut his ties: right next to the entrance you will find a picture of his parents, lovingly affirming his inheritance.

The label ‘Corbijn’ represents a lot of aspects: he is a photographer, an art director, a designer, a director of movies and documentaries AND a writer; his images made bands like U2 & Depeche Mode; for the latter he has been doing the art direction almost since their formation and can be considered a member of the band; his images covers all expressions of music (from punk to jazz & afrobeat) and all people in society from punk idol to queens (crowned ones)… and now you can add ‘fashion photographer’.

Corbijn and Fashion, it’s not an evident mix for him either. “I usually shoot personalities, but fashion is increasingly part of these photos. We decide in the morning what to wear, even though it is only a hat or a black T-shirt. Fashion is not always written in capital letters.” Stylish clothing does not equal Haute Couture, sometimes it’s just an accessory that makes the MOOD.

“My Protestant background“, he writes, “always marked & influenced my portrait photography.” The keywords “Mankind. Humanity. Empathy. … (they) kept me from doing work that lacked a deeper purpose”. You should certainly add modesty and work ethics to the values system, add sternness too. When someone remarks that there is humor in his images, he replies unflinchingly ‘that is unintentional’, with a hint of a smile.

His background also hindered his relationship with the concept of (female) beauty, but only for a short while. Sometimes “he photographed more skin than clothing”. His fashion photography exudes diverse styles, here you find a pinch of Moon or Roversi, there a bit of Leiter or just simply a lot of Corbijn.

The photographer works fast and always with almost no gear, alone or with a small team, although he admits that now for about two years, he has had to call on more assistance: he went digital, and post-processing and storage are not his cup of tea. It is the general economic situation that forces the photographer to go digital, budgets for music & fashion magazines have all but disappeared, so analogue photography is excluded.

Portrait photography is all about a relationship of trust with your subject. Once that is established a lot can happen on set, and as a photographer you must take advantage of the moment. He regularly brings all kinds of props: hats, mustaches, beards, clothing. An image can be seen of the Rolling Stones wearing hats, like a gathering of ‘Mad Hatters’. Anton Corbijn thought that they had become way too well behaved in the 90s and that they should reconnect with the spirit of their early years.

Through years of experience, Corbijn made a hierarchy: the most difficult to photograph are the actors, out of character they do not know how to take an attitude. Then follow the artists and the architects. Professional models are easier because they simply follow the photographer’s recommendations, and he closes the list with the musicians, who are always themselves.

Forget his list, just look at the images in the book or the exposition. We see an always fashion-conscious David Bowie or Brian Ferry, a Sinead O’Connor who doesn’t want to be photographed, Cecil Taylor who is just himself, Chris Martin as a king fleeing Delacroix’ July revolution, a sensitive portrait of Alexander McQueen, a luminous image of designer Ann Demeulemeester, three Ethiopian children, Beatrice Dalle who hints at the mood while buckling her shoe, and about 200 more of Charlotte Gainsbourg, Nicolas Ghesquière, Clémence Poésy to name but a few.

Does the book represent an added value? Certainly, here again we see the hand of Anton Corbijn in the art direction. He subtly applies image rhyme or juxtaposes exquisite images so that they form a (false) unity. And even more than in the exhibition, you can analyze various campaigns commissioned by Levi’s, Harper’s Bazaar, Vogue or Vuiton.

This exhibition & the book is a must for anyone interested in portrait, music, fashion & mood – or any combination of those concepts that appeals to you.

The Cultuurcentrum is accessible for the handicapped a has a free & large parking zone.