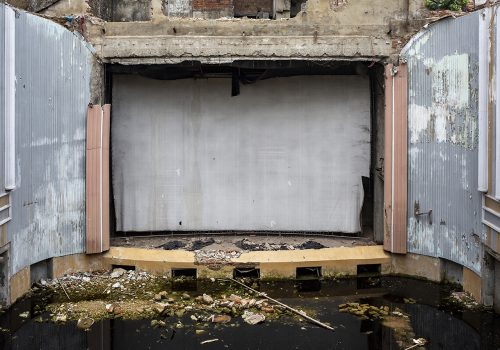 Cinema in Bangladesh is on a decline. Once a weekly adventure for teenagers and adults alike, it has now become perhaps a yearly venture for most. The advent of fast internet and portable devices which gives us multitudes of entertainment sources have made going to cinema a process which most of us think is too much work for entertainment. This has affected the whole cinema industry and axe has fallen mostly on the neck of the hundreds of cinema halls which once had house full shows all month long but now only entertains a few handful each show. Since the 2000, as many as 914 cinema halls has been closed down and only 321/224 are still operating.

Due to the decline in viewers, the once grand and gorgeously decorated structures are now empty halls and desolate run down spaces run by the most minimal of staff possible. This has resulted in demolition of cinema halls all across the country to make space for commercial buildings and new kind of cineplexes. The economically weak cinema halls are being bought and brought down as most of them are situated in prime real estate areas. The ones that are still surviving are in bad shape and has become places dark in nature. Chairs in the cinema halls have pests, paints are decaying and the facilities does not have minimum hygienic situation in them. The projection systems of the old days that ran the celluloid films have seen the last of their days and has been replaced by cheap digital projectors that is nowhere near the old ones. Staff live inside the projection rooms to save housing costs. Cinema halls had once been famous for the grand structures in a locality. Now, most of the halls have turned into run down spaces with walls losing plasters, decaying paints, mirrors and decorative items falling apart, sanitation facilities becoming like sewers.

This project documents the cinema halls and the people involved in their struggle to survive and to document them in their current situation of all across Bangladesh. It needs to be continued to create an aspect with greater geographical, economic and socio cultural context. Therefore, documentation of the cinema scene is necessary throughout the country.