Andy Romanoff : The Museums Are Closed – Life Goes on Dancing 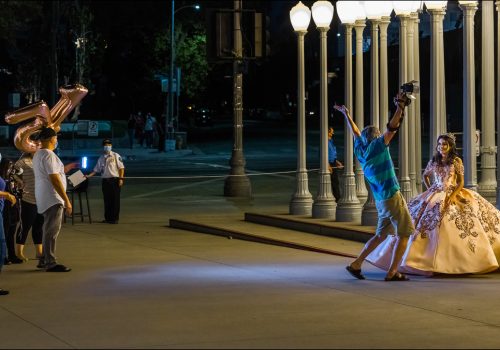 Andy Romanoff has been our correspondent in Los Angeles for 7 years. He is an amazing character: a photographer, a motorcycle enthusiast, a friend of the great filmmaker that was Nicholas Ray. He represents all the libertarian movement that has made the West Coast. Today, when photography eats everything, while images replace verbs, Andy follows an opposite approach. He gives his preference to the text, especially to talk about photography. Here is his latest submission, accompanied by a video he shot!

“The pandemic drags on, fueled by politics, disbelief, and thoughtlessness. Looking for a story to tell in the midst of the tribulations I came to the idea of how it might feel to be shooting inside the museums as they lay sleeping. Pleased with that thought I set out to find a way to do it, but the twists and turns that happened then kept me wandering from museum to museum for months looking for the story. Along the way I started thinking about how museums contained the record of our past triumphs and failures and what that meant, and over time as I kept on shooting the story transmuted itself into a very different one, one larger and more complex. And then just as I neared the end and thought I knew what the story was about, it suddenly took a turn and turned itself into a different story, one I had not expected but one I loved.

This searching and pathless way of telling a story — one that has no evident end at the beginning is something I relish and savor — at least when I’ve come to the end. The confusion and distress along the way make for a good story when the trip is over. This story kept me wondering for quite a while, pondering what it was about before it finally revealed itself. And when it did I was gob smacked by how different it was from the story I had been pursuing. How wonderful it is when a story tells itself to you and even gives you a surprise ending!

One last thought, for every picture used in this story, many were left behind. I love all my children but there are only so many that help tell the story. Further, because when I shoot I’m thinking about the fact that the pictures will ultimately end up in a montage I often shoot fragments and repetitive elements with the idea that they may be cut together to give them their final meaning.  I thought that once you saw the video you might like to see some of the images that didn’t make it into the story. So here are some of the pictures that were discarded as The Museums Are Closed — Life Goes on Dancing was taking shape.”