Best Of 2018 – An Autobiography of Miss Wish by Nina Berman 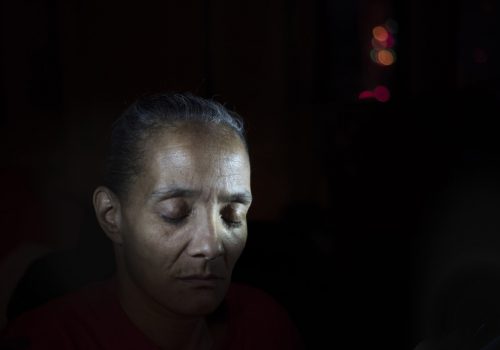 An Autobiography of Miss Wish is a story told in photographs, drawings, videos, texts and documents which explores the life of a survivor of sex trafficking and child pornography whom photographer Nina Berman met randomly on the streets in London in 1990. Three years later, she landed on her doorstep in New York City, having fled London on the advice of Scotland Yard. Once in the United States, she changed her name from Cathy Wish to Kim Stevens, became a ward of New York State, and never returned to England. The work, created from 1990 – 2016, documents her escape, her struggle to survive and assert herself despite enormous fear, to craft a life while living in a state of flashbacks, trauma and addiction and to navigate the contemporary world of American psychiatric and criminal institutions as a black woman. The story is told through photographs and her extraordinary drawings, which depict her memories of crime scenes and abuse, as well as her diary entries, medical reports, and the letters and later text messages we exchanged. The Eye of Photography talked to Nina Berman about her book.

When and where was your first encounter with Cathy Wish?

I was in Soho outside of the Centrepoint Hostel at night which was a place where kids congregated. I was talking to a group of kids, some of them wanted to be photographed, others didn’t. And so, I was just hanging out and this girl steps up to the hostel door and starts banging on it and screaming for them to let everyone in. And I took her picture and she asked me where I was from and I said New York City and we started talking about a whole lot of things, what New York was like, about Michael Jordan the basketball player, about myself and what I wanted to photograph.

What is your feeling for her?

I love her like a friend and a kind of family member. I’ve known her for nearly half my life.

What is her early story? How did she end up having difficulties in her life?

She was adopted at age 2 by a family in southern England. If you want to know more you have to buy the book. I’m not saying that flippantly, it’s part of the editorial intention to make learning about her life story difficult . You shouldn’t be able to consume a person’s biography in a sentence or two.

When did you decide to start photographing her and why?

I went to London to look at the end of the Margaret Thatcher era and the social distress brought on by her neoliberal programs. I found hundreds of street kids living in London and met Cathy randomly.

The first photograph of her as a kid at the very beginning of the book is haunting. Though it is a joyful one. Especially after discovering the last ones. What are your feeling about this evolution?

When you see a homeless woman, or someone poor on the street, or on drugs, it’s hard to imagine that this person was once a smiling child. Many people today demean those who are living rough, or who are just trying to get by, and want to force blame on them, or diminish their humanity. Also, the picture of her as a young girl, as an innocent, when seen in the context of the entire book, redirects blame on the adults and institutions around her that harmed her, dismissed her attempts for justice, or participated in trying to silence her.

Most of your photographs are clear and explicit, but some in the middle of the book are blurry. Do they have a signification?

The blurry ones are landscape pictures which speak of the passage of time, her transformation from a girl on the run in England, to the person she hoped to be when she fled to the United States. And they are also pictures of her passport image reshot several times, again to speak to the construction of identity, loss, change, etc.

Miss Wish’s drawing look a bit childish at first but they are very careful and emblematic. They usually represent raw scenes. Did you ever talk about them together and if so what was said?

We had talked about the incidents depicted in the drawings as part of years worth of conversations. And then with a few drawings we would remark on certain details.

You gathered many different material in this book – including images, drawings, letters, official documents, phone messages – and the way they are displayed in the book gives the reader a global comprehension of Miss Wish’s story, with a certain rhythm. Did she participate in the making of the book?

Yes, she was a photo editor and helped select all elements in the book including the texts, documents, etc. There is nothing in the book that she didn’t approve of. She also helped in the conception of the book and would review different versions and make suggestions and comments. And when I went back to shoot in England, she provided me with a shot list of locations which we had discussed and charted out beforehand.

How do you think this biography will help miss Wish?

Her narrative is acknowledged which helps with her self-esteem. And rather than having to explain her past, or recount her story, or justify why she might be feeling frightened or depressed, or anxious, she can offer the book to people and they can have a better appreciation as to her complexity and courage. She also wants to use the book to help connect with young people who have had similar stories. This is one of her major goals.

Do you think her story resonates in today’s American news?

Well, she is also very much a #silencebreaker to borrow from TIME magazine’s Person of the Year.

What do you think her future is made of?

Every day, she works hard to keep herself positive and to find joy and security in life.