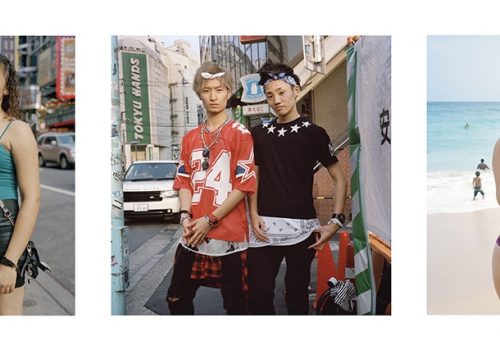 Throughout her career, photographic artist Amy Touchette has explored connections between humanity, making photographs of people within their social groups and communities. A documentarian and a street photographer, Touchette has utilized the power of photography to create authentic portraits of those who interest her. In 2012, The New York Times published images from New York Young, Touchette’s street portrait series of teenagers in New York City. The newspaper described the work as “a potent mix of street savvy and aching vulnerability…”

New York Young inspired Touchette to make the same style of portraits of teenagers in O’ahu, Hawaii and Tokyo, Japan to discover what teen culture looks like in three disparate island nations. She writes: “Before travel became so ubiquitous, island populations were more sequestered… their culture would reflect that isolation in that it felt more unified and unique than landlocked settings. Although the world is globalized now, significant remnants of each island culture still exist. I thought that because these three locations had strong and distinct personalities, it would create a more heightened and interesting visual experience.”

A solo exhibition of Touchette’s three bodies of work focusing on teens, entitled The Young Series, is currently on view at the California Polytechnic State University, San Luis Obispo Gallery, from February 22 to March 16, 2018. The work displays in different groupings to invite viewers to actively engage with the photographs, discovering differences and similarities in the postures, fashion, relationships, behaviors, and attitudes of young people from different cultures, ethnicities, and geographic parts of the world.

In each setting, Touchette wandered the streets until she found teenagers she wanted to photograph. She would introduce herself and ask permission to make their portraits; if they consented, she would take two pictures. For the first frame, she would ask them to look into the lens but otherwise let them assemble naturally. In the second frame, she might give them direction; in either case, the interaction lasted only a couple of minutes. Later, after all her photographing was complete, she began drawing connections between the images by putting certain portraits next to each other and seeing what kind of story they told. “Teenagers are raw adults,” she says. “They are exposed to adult situations, but lack the experience and wisdom that maturity brings, and adult consequences abound. I was transfixed by the extremity of their hybrid nature, but I also simply wanted to capture what is such a distinct and fleeting time in life—the teen years—regardless of where one lives.”