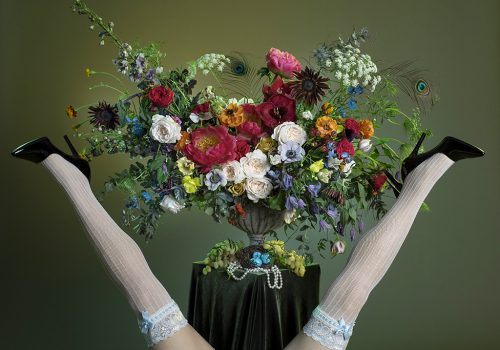 Amanda Rowan is an American artist working within the genres of performance, photography, and film, currently living in Los Angeles, California.   A graduate of NYU’s Tisch School of the Arts, she has been awarded by Photo District News, The Curator Award in 2019. Rowan currently holds a full-time professorship at the Photo Arts Conservatory at the New York Film Academy Los Angeles.

Daughter of Grammy-winning Bluegrass musician and country legend, Peter Rowan, she began shooting rock concerts during high school. In 2014, she launched the project “Born Backstage”, a location portrait series that chronicles artists and performers who are all the children of folk and rock legends, such as The Grateful Dead, Crosby Stills and Nash, The Beatles, and Frank Zappa.

In the evolution of her creative visual style, her recent work focuses on theatrical elements in life and in the studio, with an emphasis on lush color and juxtaposition. These two current series subjects are self-portraiture and still life. In 2018, she was awarded the International Chromatic Photographer of the Year for achievements in color photography, for the autobiographical image, Tour De Force.

Rowan’s commercial work includes advertising campaigns for clients including Disney, NBC, HBO, and Hilton Entertainment. Her photographs have been exhibited and published internationally at Carrie Able Gallery, Brooklyn, Photo LA, and Art Basel as well as the Wall Street Gallery and the Leica Gallery in Los Angeles. Her images are part of the permanent contemporary art collection at The Palms Hotel in Las Vegas, which includes works by Basquiat and Damien Hirst.

Q: You were doing photography as a young teenager, and then came into acting at sixteen, while always being involved in the photographic arts. How did this influence your work?

Rowan: I was privileged in that being an artist was a priority for my family, expressing myself whether through performance or photography was valued and encouraged. I was surrounded by creatives and performers when I was growing up. My expression as an artist has always encapsulated being a performer and a documentarian. Having a camera allowed me to connect to the other musicians and artists around me, and being an actor allowed me to connect with my subjects emotionally. I can feel what it’s like to be recorded and as a photographer this allows me to express my directions from a place of empathy.

Q: In your early work, the Born Backstage series, the portraits of children of the famous, those who became artists in their own right. How was this an exploration of your own story, also being the child of a famous musician?

Rowan: Early on, I was fascinated by the energy of fame. The reverence we give to famous people. The space that “fame” takes up in a room. I was given a certain amount of respect as a child because of who my father was. And this felt both wonderful and bizarre. It made me question my own validity and worth in relationship to “fame.” “Born Back Stage” was a way to process these feelings and explore the experiences of other young artists whose parents are renowned musicians. I noticed that we accord a particular divinity to musicians. Music is very emotional and personal. The project was about the similarities in the journeys of myself and the other artists in the book to find self-expression. And also about giving this unique perspective a voice.

Q: How did you develop your own identity. What were the artists that you influenced your work? When did you start doing images for yourself?

Rowan:  Once I started teaching and mentoring other young artists, I found that I began to have more respect for my own creative process. By encouraging my students to find their unique voice and be vulnerable, I started to create space to do this for myself. I stopped caring about the photos I should be taking and began to think about the images I wanted to be making. The work of Man Ray, Jo Ann Callis, Maurizio Cattelan, Alma-Tadema, Cecil Beaton and Julia Margaret Cameron were some of the artists I was looking to for inspiration. I allowed myself to create from a place of curiosity. I did not care if the images would be published or if anyone would like them. And that has been my greatest lesson. If I ever feel stuck creatively, I ask myself, who are you doing this for? What are you afraid of?

Q: The most recent work, Ritual involves self-portraiture; highly constructed, with lush color and imagery–an autobiographical dream world. What was your thinking here?

Rowan: I was looking back on my career as an actress in my twenties, it seemed like one big performance art piece where I play an “Ingenue”, powerless, and desirable. The images in my “Ritual ” series explore the feelings I had about needing to be alluring and lack of control over my body I felt at the time. I started to see how my need to be sexually desired was tied to my survival. I became interested in this pattern historically and how women need to be erotic to be relevant. The project explores the intersection of power, sexuality, and vulnerability. The visual tropes I am using are very much a product of my experience as a young actress pedaling my attractiveness. The images portray an anonymous woman that reminds the viewer of vintage pin-up art mixed with religious iconography.

Q: Your visual style evolved from documentary photography to the series in studio (Ritual and Still Life––from digital to analog.) Portraiture to the inanimate. How did Ritual affect or evolve into working on Still Life.

Rowan: On a formal level, I was ready to create work that did not involve a human face. So much of my career had focused on the expression, character, and emotions in a portrait. I wanted to see if I could challenge the viewer to feel connected in the same way to my work if the subject had no face. To create the same intensity in still life as I had in a portrait, I wanted to control all the elements. I moved to the studio, where I was able to create particular environments and control every component in the frame from the lighting to the props. I had the pleasure of collaborating with a very talented florist on this Marisa Bosquez-White. Shooting on film was also a way to slow down the process. To enjoy the process and not overshoot. I wanted just one final image of each setup.

Q; The Still Life series, the image of the JELL–O mold harkens back to a time, and it became very popular in the 1950’s, when women’s work was in the kitchen. Discuss your imagery where there is much vocabulary that consistently appears.

Rowan:  I had just lost my maternal grandmother and inherited all sorts of treasured objects from her. I wanted to document them and also connect with her spirit. She was a confident working woman, but she also portrayed herself as a domestic icon of the time. Glamorous and feminine ready to cook and clean and keep a home. She left me a lot of vintage nightgowns and said that they were what you wear with your husband when having “Dinner at Home.” This idea of dressing in fancy lingerie for a night in sounded fabulous and outdated compared to the sweatpants I often wear for a night of “Dinner at Home.” The project is a fantasy in that way, a resurrection of both my grandmother and a lost formality of her time. The images are poking fun at the seamless ease with which domestic labor was over the top and trivialized in her generation. I think still life is the perfect way for me to explore my sense of humor. Food is fun for me. Shooting still life, is a way that I feel able to tap into a shared languish of “women’s work.”

Q: Many photographers are also filmmakers. Who or what encouraged you to make the Music video, Beach Body, for the band, Helaine and the Hurricanes, as you had no previous experience in the moving image? What was that process?

Rowan: After the process of my most recent work in the studio where I had control over all the elements, I had newfound confidence to direct moving images. The Artist, Helaine and the Hurricanes, approached me about directing a music video of the band, after I posted some short art videos on Instagram. We have a very simpatico visual style, and my aesthetic was perfect for her brand. Directing “Beach Body” was an incredible experience. The song is about promoting positive intersectional body image, so that was really meaningful and fun to make visuals for. It felt full circle being from a musical family and being an actress to directing. It feels like I was always meant to do it and I don’t know what took me so long other than its 100 times more complicated than photography and not to be underestimated. I worked with an incredible cinematographer on Beach Body, a former student of mine Tanne Willow. We had worked together when she assisted me on “Ritual”, and I really trusted her, and this allowed me to focus on directing. I can wait to direct more narrative pieces and music videos.