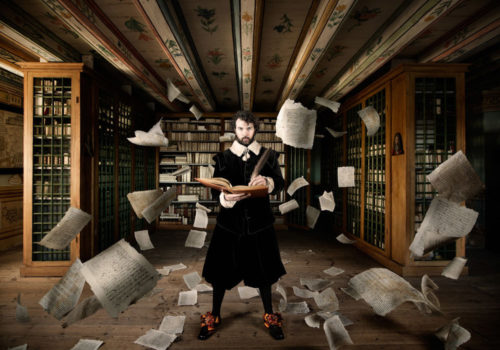 Sydney photo-media artist Alexia Sinclair’s love of European history continues with her new series “A Frozen Tale” set in the 17th Century Skokloster Slott, a majestic castle commissioned by Carl Custaf Wrangel in the Swedish Age of Greatness. Today Skokloster Slott is known as one of the finest examples of Baroque architecture and the castle also houses the largest private art collection in Europe.

In “A Frozen Tale” Sinclair has created a cast of characters to convey what daily life may have been like 300 years ago in this castle, which is built within a network of lakes upon perpetually frozen ground. Skokloster Slott lies next to Lake Mälaren, 80km from Stockholm, and its contents have been ‘frozen in time,’ untouched for more than three centuries.

Sinclair says the opportunity to make this series came about unexpectedly. A year ago she was in her Sydney studio checking emails when she came across one from the Royal Palace of Sweden requesting permission to use a photograph from Sinclair’s Regal Twelve series that features famous and infamous women, all historical figures.

“The email was from the Armoury. They were putting together an exhibition on Queen Christina of Sweden, who was an incredible ruler in the 17th Century, and they wanted to exhibit my particular piece on her from the Regal Twelve. They also invited us to attend the exhibition which was being opened by the King’s sister, Princess Christina”. ‘Us’ is Sinclair and her husband, and producer, James Hill.

Never one to let an opportunity pass, Sinclair agreed to the request and put in one of her own. “I asked them if they knew any princesses who might want to be photographed,” she laughs. “And they said well you know we are not sure we can get you a princess, but we can get you a castle. And that’s kind of how this new series came about”.

“It’s one thing to be given the keys to a castle, and another to know what to do with it,” says Sinclair who became pregnant with her first child just as the project kicked off. “I knew I wanted to build this really big, epic story around this castle, but I also had a deadline. Nine months!”

It took Sinclair three months to organise the initial shoot, which was done on a shoestring budget with many volunteers. She put out calls on social media for assistants, and for models of all shapes and sizes including a mother and newborn for her image featuring the wet nurse. Once her team of 40 was assembled Sinclair and Hill went through the process of finding sponsors for the gear they needed, as carting it from Australia was too expensive. Profoto and PhaseOne came on board, and armed with suitcases full of costumes that Sinclair had made, the pair headed to Sweden.

“We landed in Stockholm after a 30 hour flight, went to the opening of the exhibition, then picked up our gear from Profoto, went out to the castle, did a reconnoitre and then returned for a two day shoot with all of these people I’d never met in person,” says Sinclair.

Shooting in a museum came with a raft of considerations that don’t normally apply, and Sinclair is used to working in spaces where she doesn’t have free reign, but Skokloster Slott had its own idiosyncrasies that made the shoot even more complex as she explains.

“The castle has no power, it is set on a frozen lake and the whole of the centre of the castle is frozen throughout the year and that’s part of why it is completely preserved because it is a big ice chest. So we’re working in this space with no power, where you can’t touch anything, where you have to watch where you walk for fear the priceless chandelier in the room below may fall and where you are not allowed to bring food or drink and I was ravenous because I was pregnant…yes there were challenges!”

In creating her vision for the series Sinclair started by researching those important historical figures who had visited the castle over its lifetime, but the more she delved the more she became intrigued with those who worked in the castle and enabled the privileged a life of leisure and comfort. Creating fantasy characters allowed Sinclair to bring together a narrative on what she imagined Skokloster Slott was like when filled with life.

“I like to produce narrative pieces,” says Sinclair who draws inspiration from the paintings of particular periods of history. “Artists really did do so much exploration into the common person and the everyday life and so many paintings of this period are of people engaged in daily activities and that’s what I got swept up in.”

“Skokloster Slott is called ‘a cabinet of curiosities inside a cabinet of curiosities’ that is how it is described in the period because every room is so uniquely different to the next and every room tells an entirely different story. I had planned to use certain rooms based on my research, but when I got there I discovered they’d moved tapestries over the years from those rooms, or they were closed, so there was so much thinking on my toes and decisions made in minutes.”

She walks me through the image that features an elderly woman pouring water into a vase in one of the castle’s drawing rooms. “The selection of this room and the scene were completely impromptu. I had this lady coming and I planned on her carrying some carcasses, rabbits or something, in through a kitchen. But there is no big kitchen, and I expected there would be, but it’s not something that has been preserved. So I was running around the castle and trying to find a location where I could use her. Then I saw the still life that she’s standing in front of and I thought that painting really evoked the story I wanted to tell”.

For this image alone Sinclair undertook a number of photo shoots. The woman was photographed in the castle in front of the still life. The geese were photographed in Sydney in Centennial Park. The light coming in through the left hand window and the smoke were shot in Sinclair’s studio to evoke an era when fireplaces were in constant use and the air thick. Even the water being poured from the jug was a separate shoot.

Sinclair says her use of photomontage allows her to build drama in her images. “People often think only of the negatives of post-production, but the positive is that you can produce this drama much like a film. It’s the magic of post-production,” she concludes.