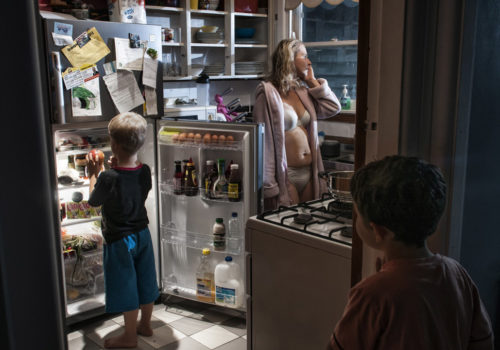 Photographic artist Alec Dawson says his work is “about internal emotional dramas, which often reveal themselves in quiet solitary moments in people’s homes”.  Drawing on the tableaux vivant, Dawson uses cinematic lighting to dramatize the real-life situations he photographs.

Dark and edgy his work is reminiscent of Gregory Crewdson’s, although there is a more overt leaning towards the grotesque in Dawson’s images that plays to themes of self-loathing and despair. He tells me “Crewdson was a big influence on my work initially. But these photographs are really reflective of my state of mind and although I was borrowing a lot of similar language, the scale and nature of my images are different”.

Unlike Crewdson’s work the characters in Dawson’s images are real people with the photographs taken in their homes using the actual fittings and furniture as props. “It’s fairly authentic, it’s how they are and I am picking up the things in their life that reflects my depression.“

Depression? “Yes,” he says. “The chronic evolution of our lives can generate emotional cancers. In our youth, these cancers are small and neoplastic. For some of us, these small nuisances grow into oppressive and paralyzing monsters. ‘Nobody Claps Anymore’ is my response to my own emotional cancers: regret, isolation, anxiety, and depression. It is my de-facto art therapy”.

In choosing his subjects Dawson says he looks for “average people” not models. And people who live in “chaotic places”.  Sometimes friends will offer to pose for him or will introduce him to a likely candidate. Occasionally he finds inspiration on Facebook in the banal photographs that appear in the feed. “You can see the drama that lies beneath and sometimes I’ll see something going on that resonates,” he says.

Dawson doesn’t preplan other than the time of day – he likes to shoot at twilight or at night when he can use his cinematic lights to the best advantage. There’s no reconnoiter either. He’ll show up on the designated date, check out the space and begin to compose the image in his head. He’ll choose the room, select clothing from the subject’s wardrobe if necessary and make minimal adjustments to the setting. And then it’s lights, action, camera, a process that can take anything up to six hours depending on the complexity of the scene.

To date he’s shot around 40 photographs for ‘Nobody Claps Anymore’ over a two-year period. He’s not finished and intends at some point to amass enough images for a book. Dawson has also used himself as the subject in two of the photographs in this series, explaining he felt he needed to experience what those he photographs have communicated to him, feelings that haven’t always been positive.

“Sometimes they feel confronted by what they are seeing because I am reflecting back to them their existence and it can be a hard thing to look at…I’m not taking a glamour shot, or a shot influenced by a lot of advertising language. I’m trying to reflect a sad reality”. He says some have “taken it on the chin,” and others have been able to motivate themselves to get out of their funk. Others have just accepted what they’ve seen. One woman underwent cosmetic surgery to alter her image.

But Dawson says he isn’t on a mission to change anyone and doesn’t have a message. “I want to create a narrative that shows the ‘what,’ but want to leave the ‘why’ to the audience. I don’t want to tell them the background. I don’t want to masticate their food for them. Reality ruins the illusion”.