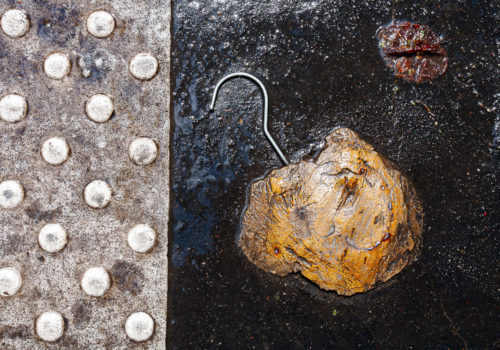 The online exhibition ‘Concrete Alibi’ featuring works by Anthony Epes at Albumen Gallery is now open. ‘Concrete Alibi’ reflects on the throwaway traces of a world dominated by consumption – testament to the rushed superficiality of modern life. Anthony Epes’s response as an artist is ” to attempt to bring awareness and at the same time create something beautiful from our gross neglect and find some sense of cathartic release for myself.”
Without using any visual trickery Anthony Epes artfully creates startling and often vibrant images lending the transient aesthetic permanence.

Anthony Epes was born in Athens Greece to a Greek mother and Black American father. Raised in California, he currently lives on the Southern coast of Spain.
Influenced by his early studies of colour photography, Epes ventured into experimental development of film and produced the Arboreal Dreams series of fine art prints.
There is a sense of aloneness that permeates Epe’s images, a physical aspect of wanting to always travel and shoot alone. But also a deep stirring of someone who has never found their place in the world. The feeling of isolation that comes in and out of all of our lives.
Epes was powerfully influenced by Ernst Haas as a young photographer and continues in his footsteps of celebrating light and finding beauty in even the most mundane places.
Epes has published three photo books of his decade-long wanderings through cities at dawn. He has frequently been featured in international press including the BBC, CNN, Atlas Obscura, the Guardian and French Photo Magazine. Epes is currently working on his fourth book.