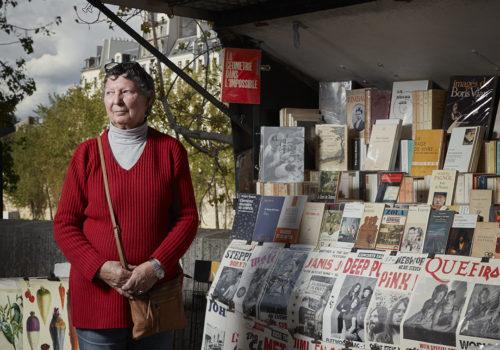 A few years ago, buying a book on the quays I met Jérôme Callais, bookseller and president of their association. The conversation helping, germinated the idea of ​​making the portrait of the whole corporation. Time passed and then came the health crisis which highlighted our need for culture and classified books as an essential good. I then thought of the vendors on the quays and decided to make the initial project a reality. So I set out to meet this community which, for 450 years, has represented the largest open-air bookstore in the world.

Heirs to peddlers and “hawkers”, they appeared following the development of the second-hand book market linked to the rapid growth of printing in the 16th century. First traveling merchants, their practice evolved with the construction of the Pont Neuf in 1606. They settled there, presenting their books on a simple canvas. The construction of stone quays at the end of the 18th century saw an evolution in their activity. The number of booksellers increased throughout the 19th and 20th centuries at the same time as their status changed. The current boxes were made official in 1891 when a municipal decree allowed operators to leave their merchandise in situ.

A major symbol of Paris

In the world of books, quayside vendors are situated between the new bookshop and the bibliophile bookshop. The books on offer are defined by their diversity and low price. Thus, over nearly 4 kilometers along the Seine, some 300,000 works are available. Through their activity, booksellers are a major symbol of Paris and of the intellectual world by contributing to the spreading and recirculation of literary heritage. Aside from any social, political, cultural or religious consideration, the “green wagon” boxes constitute a democratic space for exchange and knowledge.

A treasure of memory

This profession-passion has led many of its members to specialize in such and such a field to become references in the world of bibliophilia. The extent of their knowledge makes them an irreplaceable treasure of memory at the start of the 21st century. It is this human network whose main raison d’être is culture, which presents their particular character on the banks of the Seine. Around the world, other book markets exist in Tokyo, Rome or Beijing, but none has the scale of the Parisian model, unique in its size, its age, the variety of its offer as well as its permanence throughout the year.

Famous and not well known

The booksellers of Paris are famous throughout the world but remain poorly known and often only appear in the background of a postcard vision. This is why it seemed important to me to meet them with a photographic approach. And if during their history, many texts have been written about them, on the other hand, no extensive iconography has been made. I made 140 portraits over the period 2021 – 2022 in order to establish a dated state of the corporation.