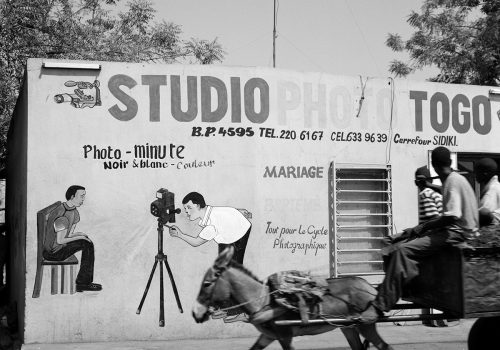 The 2020 exhibition programme at the Gropius Bau begins with Six Songs, Swirling Gracefully in the Taut Air, a photography exhibition showcasing works from various long-term series composed by Berlin-based Nigerian photographer Akinbode Akinbiyi over four decades. This exhibition explores Akinbiyi’s approach as a wanderer and mediator between the hemispheres, ceaselessly documenting and walking across coastlines and cities such as Lagos, Berlin, Johannesburg, Bamako, Athens, Chicago, Dakar and Khartoum. The city is his studio and people’s daily rituals become recurring manifestations before his camera. This exhibition highlights his unique relation to medium format photography and use of the twin-lens reflex camera in communicating the soul of inhabited landscapes. Taken from hundreds of photographs that comprise these durational projects and form the artist’s personal archive, a special selection will be brought together at the Gropius Bau, marking his first major solo exhibition in Germany after his participation at documenta 14 in Kassel and Athens.

“To mark the beginning of our 2020 exhibition programme, we are delighted to welcome Akinbode Akinbiyi with a solo exhibition. Living and working in Berlin for many years, Akinbode witnessed and documented the changes of the city since the early 1990s. With the rapid changes the city undergoes, it is important for us to give his unique perspective an institutional platform.” – Stephanie Rosenthal, Director of the Gropius Bau

In contrast to a world obsessed with the continuous stream of “instant”, Akinbiyi slowly assembles striking details from the quotidian surface, lived rhythms and social textures of places. Preferring to witness undramatic moments – both morbid and joyous – he situates how hope resides in the dark inner life of cities, as well as the convening between breathing bodies and spirituality. The artist notes, “What I’m doing is observing, taking part in this urban phenomenon and trying to record documents. It is a kind of fine sensibility of understanding the passageways within the city.”

Notable series of work on view include Lagos: All Roads (1980s–today) which plots the many moods and faces of Akinbiyi’s home city and Africa’s largest metropolis, Lagos. His photographs approach the urban environment shuttling between anonymity and kinship, noise and refuge. The viewer experiences these image sequences as contiguous and open-ended. Yet, the mega city is never ever fully grasped and circumnavigated, since it is in a continuous phase of reinvention and collapse. While several of the pictures in this series focus on street corners, social processes and marketplaces, many scenes plot the spread of photography studios, print outlets and text facades that convey the visual grammar of Lagos and its perennial relation to image-building.

Akinbiyi has stressed the importance of “making rather than taking images”, recognizing that picture-making is an event in itself, the photographer combines feeling and craft. The exhibition’s title, Six Songs, Swirling Gracefully in the Taut Air, suggests the importance of the sonic register in Akinbiyi’s practice as much as his participation in the visual grammar of listening. One may also study his photography through the codes of improvised jazz such as collective affinity, experimental music notation and seriality. The sacred and profane become interwoven in Sea Never Dry (1980s–today), a series that brings together coastal zones of West African cities and Europe, portraying public life around beaches while also capturing interludes such as sacred ceremonies, street trade, tourism and environmental degradation.

African Quarter (1990s–today) is a series of photographs made in Berlin since the late 1990s that plots candid encounters amidst the African diaspora and Afro-German communities in the city, especially around the neighbourhood of Wedding. Akinbiyi traverses streets that are historically pegged to Germany’s colonial exploits since the Berlin conference of 1884 including recent stories of migration and persecution. Refracted views of the transforming metropolis recall ghosts from a shared past and subaltern voices of the present. As a counter-mapping of the city, streets such as May-Ayim-Ufer and Martin-Luther-King-Weg are visited in African Quarter to recall figures who strove to combat racism and upheld the long history of anti-colonial struggle. In sum, this series extends from the photographer’s autobiographical experience as a Berliner.

An artistic practitioner dedicatedly engaged in mentoring, curating and writing on photography especially in the African context, Akinbiyi’s relationship to the photographic medium moves well beyond direct use of a camera. Rarely has an artist-photographer journeyed this extensively to carve out an encyclopedic suite of images consistently tracing realities across the African world and beyond. Akinbiyi contemplates a range of life conditions and landscapes in a scale of grays.

A concluding element to this exhibition is the short film by visual artist and writer Emeka Okereke I wonder as I wander that provides a deeper view into Akinbode Akinbiyi’s methodology, anecdotal records and working principles, shot in Berlin and Bamako.

Born in 1946 in Oxford as a child of students from the former colony of Nigeria, artist-photographer Akinbode Akinbiyi studied in Ibadan, Nigeria, in the 1960s and in Heidelberg during the 1970s before moving to West Berlin. While initially training in literature, being an avid reader of fiction and poetry, Akinbiyi began to see the world through a viewfinder and mastered the dark room process in the 1970s. As a wanderer and mediator between the hemispheres, he has ceaselessly documented and walked in cities such as Lagos, Kano and Dakar since 1987 when he earned a STERN reportage stipend. In 1993, Akinbiyi co-founded the UMZANZSI, a cultural center in Clermont Township in Durban, South Africa. Over the years, he has taught and mentored photographers in Africa and other parts of the globe. Akinbiyi was awarded the Goethe Medal in 2016.