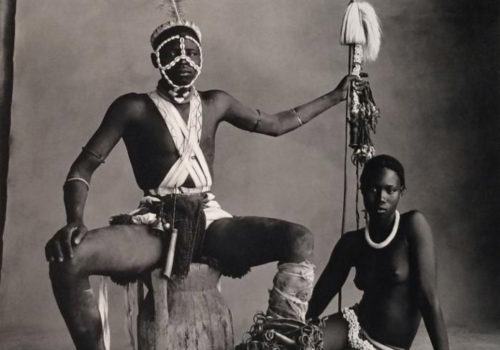 The Alan Klotz Gallery (formerly Photocollect, Inc.) has been a dealer in fine 19th and 20th century vintage photography and emerging contemporary work for the past 38 years. They travel extensively to buy as well as to sell, and at home, they hold collector seminars to attract and encourage new collectors. They also act as appraisers, auction-purchasing consultants, and agents. The gallery selected for us us six prints on display during the AIPAD Photography Show 2015.

1. Irving Penn
Seated Warrior, Sitting Girl, Cameroon, 1969
Medium: Platinum / palladium print
Size: 21 3/4 x 19 1/2 inches
This platinum print is a good example of Penn’s penchant for photographing exotic subjects outside of their usual environments. This particular image has not appeared at auction for many years.

2. Walker Evans
Waterloo Station, London 1957
Medium: Gelatin silver print
Size: 8 ¾ x 10 ¼ inches
Most people, including many curators, are not aware that Evans ever photographed in London, so this is a rare find.

3. Carl Van Vechten
James Baldwin
Medium: Early or vintage gelatin silver print
Date: September 13, 1955
Size: 13 ¼ x 9 inches
This is a beautiful portrait of the young James Baldwin, was done the same year as one of his most famous and influential books, “Notes of a Native Son” was published.  The print itself is very rich in tone, and printed on a particularly fine paper.

4. Lennart Nillson
A Child is Born
Medium: Most likely a C-print
Size: 21 ½ x 19 inches
This pioneering photograph was done with the aid of advanced fiber optics, and shows a living fetus in situ in the womb.  I remember the shock it caused when a variant of it appeared on the cover of LIFE Magazine. This large, early print of it, is still pretty amazing.

5. Harry Callahan
Chicago Street, 1950’s
Medium: Gelatin silver print
Size: 6 x 9 inches
This graphic, highly geometric, chiaroscuro Chicago street scene is typical of Callahan’s work while a teacher at the Institute of Design in Chicago.  As a teacher, and an active artist his work, and this one in particular, influenced an entire generation of photographers. This was especially true for Ray Metzger, whose work owes a clear debt to Callahan, and to this image.

6. T. Lux Feininger
#70 Still Life with Banjo and Clarinet on Holders
Medium: Vintage gelatin silver print
Date: 1920’s
T Lux Feininger, son of the painter Lyonel, and brother of the photographer Andreas, was a Bauhaus artist. He played the banjo shown here, and performed with it in films shot on and from the roof of the Bauhaus building in Dessau. Of course this still life concentrates on the design value of the instrument, rather than its sound. Just this last December, in their landmark sale of the photographs collected by Howard Stein, Sothebys offered a variant of this image.  We think our print is twice the image of that one, at less than half the price! It’s a good example of the values to be found at the AIPAD Show versus the auction room.