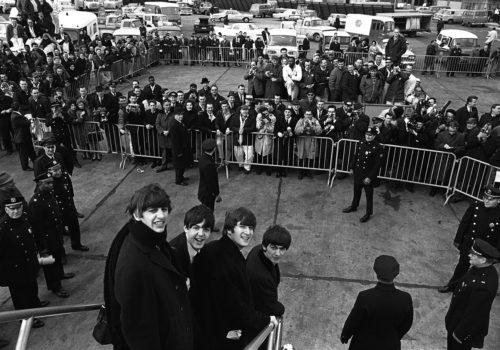 With a focus on four seminal events of the 1960s—the building of the Berlin Wall, the Beatles’ first American tour, the James Meredith March Against Fear, and the assassination of Robert F. Kennedy—Harry Benson: Four Stories features approximately three dozen works that incisively capture defining moments of this tumultuous period. On view at the Addison Gallery of American Art through January 30, 2023, the exhibition presents the photographs that catapulted Benson’s career, with 14 works by Benson from the Addison’s collection as well as loans from the artist.

The exhibition includes historic photographs of soldiers and civilians at the construction of the Berlin Wall and Checkpoint Charlie; Martin Luther King Jr. and John Lewis at the James Meredith March Against Fear in Mississippi; the Beatles through the rise and peak of Beatlemania; and Robert F. Kennedy’s hopeful start to a presidential campaign and shocking assassination. Benson’s photographs illustrate an important and turbulent time in world history, creating a record of events that defined a decade.

Scottish-born photojournalist Harry Benson CBE came to America with the Beatles in 1964 and in his words, “never looked back.” In the decades since, the award-winning photographer has demonstrated great range in his work. In addition to the powerful stories featured in this exhibition, Benson also has covered conflicts in Kosovo, Bosnia, and the Gulf War; is the only photographer who has photographed the last 13 U.S. presidents, from Dwight D. Eisenhower to Joe Biden; and has also turned his lens on everyone from Muhammad Ali to Queen Elizabeth II. His photographs of historic events, political figures, and luminaries have been published in major magazines including LIFE, The Daily Express, Time, Vanity Fair, W, Newsweek, French Vogue, Paris Match, Forbes, The New Yorker, People, Quest, and The Sunday Times Magazine. The subject of a 2015 documentary, Harry Benson: Shoot First, Benson’s work has also been published in numerous monographs including the recently released Paul celebrating the 80th birthday and career of Paul McCartney.

In conjunction with the exhibition, the Addison Gallery is hosting a Q&A with Benson followed by a reception on Saturday, October 22, beginning at 5:00 pm. Both events are free and open to the public; registration for the Q&A is required. Find more details at www.addisongallery.org.

About the Addison Gallery of American Art

Devoted exclusively to American art, the Addison opened in 1931 and holds one of the most important American art collections in the world. Its collection includes more than 23,000 works by artists such as John Singleton Copley, Thomas Eakins, Winslow Homer, George Bellows, Georgia O’Keeffe, Jackson Pollock, Jennifer Bartlett, Lorna Simpson, Kara Walker, Jaune Quick-to-See Smith, Kerry James Marshall, and Mark Bradford, as well as photographers Eadweard Muybridge, Walker Evans, Robert Frank, Cindy Sherman, Laurie Simmons, Sally Mann, Dawoud Bey, Carrie Mae Weems, and many others. The Addison Gallery, located in a stand-alone building on the campus of Phillips Academy—a residential school of grades 9 through 12 in Andover, Massachusetts—offers a continually rotating series of exhibitions and programs, all of which are free and open to the public.