A look at the new Russian landscape photography 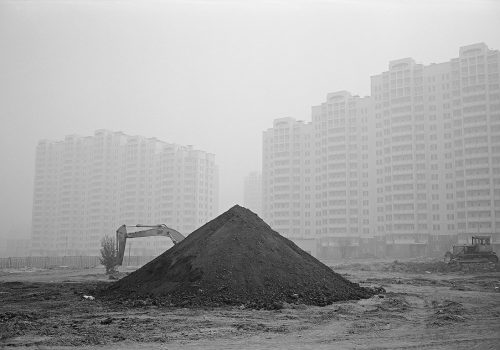 The exhibition New Landscape, currently on view at Boris Yeltsin Center in Yekaterinburg (Russia), features seven photography projects exploring the landscape as a means to reflect on the new post-Soviet culture. Observing how the man-made landscape is reshaped by the transition from the industrial to the post-industrial, the works show how these changes are further augmented by the transition from the planned economy to the free market, from the Soviet to the post-Soviet. Brought together, the works create a portrayal of what may be the transformation of a landscape and a culture unprecedented in scale and pace.

The works of Liza Faktor, the earliest among the featured projects see Siberia as the Russian Frontier, once partially tamed but deserted anew as the centrally planned economy failed. Alexander Gronsky’s Less than One explores the outermost regions of Russia, where the average population is less than one person per square kilometer. Documents of Nature by Valeri Nistratov, mainly shot along the fringes of Moscow, the country’s megacity capital, looks for the marks of the nascent capitalism at the borders of the urbanized and the rural. The works by Max Sher and Petr Antonov explore similar changes, except they use built environment to record the emerging aesthetics. Sergey Novikov’s Grassroots presents the landscapes of contemporary Russia as a gigantic backdrop for Russian amateur football as the country prepares for the 2018 World Cup, and it is this backdrop that draws principal attention. Arcadia by Anastasia Tsayder, similarly to Valeri Nistratov’s Documents of Nature, looks at the relation between the human and the natural, but instead of finding an opposition discovers a strange co-existence. If there is a conflict between the two it is the nature that is winning as it is reconquering the urban space.

The artistic interest in the explorations of the man-made environment with the means of photography can be traced back to the 1960s and 1970s, the most prominent landmark being the exhibition titled New Topographics: Photographs of a Man-Altered Landscape. The exhibition was held at Kodak Eastman House in Rochester (USA) in 1975 and is often perceived as a turning point which marked both the acceptance of photography within the domain of contemporary art and the migration of conceptual art practices into photography.

Similarly to the photographers of the New Topographics, the artists presented in this exhibition use the vocabulary of the landscape to reflect on the changes in a society and a culture. Their works focus on the conflict between the man-made and the natural, the urban sprawl, the construction of the uniform shopping malls and office buildings, the transformation of the Soviet centrally planned landscape by the market economy – all these come as manifestations of the new post-Soviet landscape being born.