A Handful Of Dust 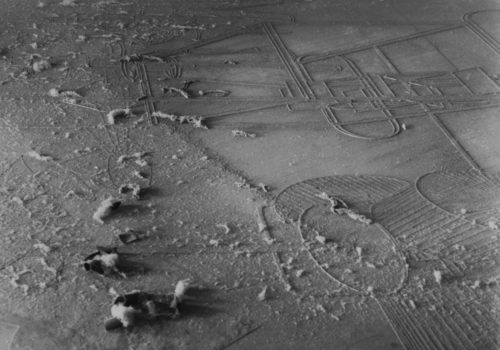 Last winter, Le Bal in Paris held the exhibition A Handful of Dust, and now we can see it in a more modest version at Pratt Institute’s photography department. It’s not just a cut-back copy, having incredible density and great coherence. The exhibition was created by curator and essayist David Campany, who began with two main points of interest, the first a fascination for the famous photograph Dust Breeding by Man Ray and Marcel Duchamp and the next an obsession for the line from T.S. Eliot’s The Waste Land, “I will show you fear in a handful of dust.” The photo was printed for the first time in a magazine in 1922, and the poem was published the same year. The coincidence was too irresistible for David Campany.

The photos that he selected fall within this aesthetic of dust, traces, and residue, but the exhibition is not strictly thematic. David Campany is telling, mainly from the photo by Man Ray and Marcel Duchamp, a sort of counter-history of 20th century photography, a history of dust through images. The gesture is subtle because it is not interested in photography as a historical tale. Rather, it unveils history through photography. From this dust, which, for T.S. Eliot, symbolized the debris of war and devastation, the exhibition tells a mythic and metaphoric history of the 20th century: the great wars, the ecological disaster that was the Dust Bowl in the 1930s, Hiroshima, the Gulf War, and the September 11, 2001 attacks. Dust is what accumulates when there is a catastrophe. It marks the passage of time. It is as photogenic as it is embarrassing on a negative or a print.

From this chronological thread, David Campany also expands on the first point of interest that brought him to this photograph because it is inherently ambiguous. It bore different titles. It was composed by four hands. One would ask if it is a document or a joke, a landscape or a studio shot, a close-up or an aerial view. The exhibition A Handful of Dust again plays with this ambivalence and modernity. It is carried out between two different registers (the cheekiness of Ed Ruscha compared to the Jeff Mermelstein photo taken at Ground Zero just after the attacks), between scales (Sophie Ristelhueber’s view from the sky put in perspective by Gerhard Richter’s detail photos of a painting), and it does not hesitate to bring together the big names of photography and the anonymous, exhibition prints and mass printed photos.

The exhibition is not a capricious assembly. It is extremely tight and controlled. What is undoubtably appreciated the most in A Handful of Dust is the curator’s approach. David Campany does not imitate the scientificity of historic exhibitions, nor the free nature of association specific to the collection.   His way of conceiving the exhibition is between the two, and it makes you think about the artist’s work. Starting from one point of interest, expanding it to all its extent, accepting the arbitrary, looking for a form of necessity, and leaving things to sing together until we can shout, “that’s it!”, David Campany conceived this exhibition with seriousness. It’s documented and scholarly, but he composed it as one would write a poem, through metaphors, shifts in meaning, and analogies. We leave the two small rooms of Pratt Institute with a feeling of enthusiastic satisfaction, eyes and spirit synchronized.