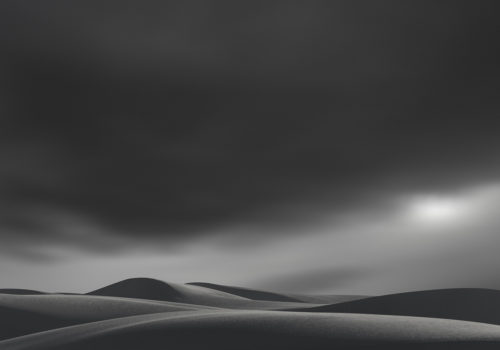 I discovered David Zimmerman in 2009 in Cannes during the Sony World Photography Awards. That year, I was a member of the jury with Sarah Moon, Mary-Ellen Mark, Bruce Davidson, Philippe Garner, Jurgen Schadeberg, and a few other famous photographers. Beautiful encounters.

The grand prize, the Iris d’Or for Best Photographer of the Year, went to David Zimmerman for his first series on the desert. When I met him, David was an American as I love them, always with a glass of red wine in his hand and a cigarette in his mouth. Very relax, as they say … Suddenly, in Cannes, we get along well.

The following year, his series on deserts will be exhibited in my Parisian gallery, A.galerie. David, who then lived near Santa Fé in New Mexico, made the trip to Paris with some friends for his opening. He puts his own energy into it, he is generous in his work and our relations are closer. He’s an amazing character. A very successful publicity photographer in New York for years, he decided to take it easy and move to a place more suited to his character: New Mexico. This southwestern state, close to California, is still a lot cooler than the big irritated apple along the Atlantic. A few years later, to deepen the cool, David Zimmerman moved to India deciding to have a simple life, close to others and to nature. The recurring themes of his work revolve around the social, travel, ecology: Buddhists in India, fire fighters in the Gulf of Mexico, Trump’s deep America, the beauty of the Deserts destroyed every weekend. by brainwashed Americans (2 series of photos and 1 film), the Last Refuge series which shows the last things left to a family who has nothing left, etc… Human, funny and endearing, David Zimmerman is a talented artist but above all a human being as you seldom meet.

“We are forced to exploit the resources of our planet in order to survive. This is the huge paradox of human existence.

My work in these natural, altered and endangered landscapes tries to find answers.

I am trying to find the balance between human needs & the consequences of the persistent depletion of the planet’s resources.

My inspiration for my 1st series of deserts came to me from the very nature of these wide open spaces, sometimes quiet, sometimes fierce.

My own elements of response to this paradox as well as my interaction with these environments also nourished this inspiration.

Beyond the extraordinary beauty and the immensity of the scenery that was revealed to me, I began to feel the fragile balance due to the presence of man in this territory.

The desert can haunt you. In the half-light, in the heat or in the storm, I felt my own vulnerability.

Having lived most of my life in big cities, the idea of ​​my presence in nature had rarely occurred & the impact of my actions seemed negligible, since I was one man among millions.

This is where Part 2 of the project started, with questions like “How do we relate to nature? Or “how do our actions influence the natural world?” “.

Symbol of the damage inflicted on the desert, my abstract images of traces left on the sand in the 2nd series & the film which documents them reveal a different perspective.

Empowered by a sense of entitlement and immunity, millions of uninformed people consider their actions to have little or no impact on these deserts, and our planet at large. ”