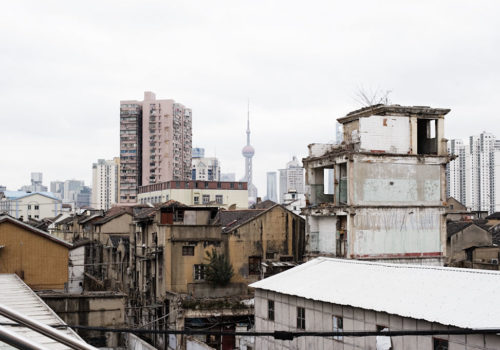 Graduated in 2010 from the London College of Communication (University of the Arts London), Phillip Reed (born in 1983 in the United Kingdom) has since created several photographic series that disclose his interest in sociology and architecture. Phillip has developed an acute awareness of urban space thanks to his experience of growing up in a small town, living in London for many years, and then regularly visiting metropolises abroad.

His series related to China strike the viewer by their neat composition, elegance, and ethereal quality. Phillip has always tried to get out of his comfort zone, by exploring new themes, new places, new genres, such as portrait which he brilliantly masters as much as landscape. He examines the manifestation of individuals’ ideas and ideals in the environment by creating what he calls ‘conceptual documentary photography’: astounding images that depict his personal interpretation of the urban world.

Over the past seven years working as an independent photographer, Phillip has already won the Hotshoe Award and more recently exhibited work at the 2012 Daegu Photo Biennale. Other venues in the United Kingdom, Korea, and China dedicated either group or solo shows to him.

Marine Cabos : Do you remember your initial experience at making photography? Who has influenced you?

Phillip Reed : I did my Art foundation at Hastings college, during the course we were introduced to a variety of different mediums and encouraged to experiment. I’d just finished studying Sociology and was considering going on to study Architecture, when I was introduced to Photography it felt as though I’d discovered a medium capable of combining my interests in both subjects. I remember being introduced to the Bechers and the Dusseldorf school of Photography, which really opened my eyes to the possibilities of the medium. I was always interested in how environmental factors shape our experience and perception of the world and I was suddenly aware that I could explore these themes through Photography.

M.C : You call yourself  a ‘conceptual documentary photographer’, which might appear slightly paradoxical for the highly personal dimension of conceptual is assumed to be antithetical with the assumed objective approach of documentary. Why do you have chosen to use these specific terms in order to describe your practice?

P.R : I find the idea of producing an image that objectively communicates the ‘essence’ or ‘truth’ about a person or a time or a place difficult to understand. With photography your starting point is in reality, but your perception of that time and space has been influenced by external factors. As soon as you pick up a camera you are editing, you’re choosing what to include or exclude, It’s a highly personal perspective and the result of that process probably speaks more about the person taking the pictures than anything else. However I don’t find that restricting, it’s actually liberating. Photographers often shy away from having an opinion and try to show things as they ‘really are’. I don’t think it’s necessary; Artists don’t seem to grapple with the same issue. I like work that is personal and opinionated.

M.C : Most of your photographs are landscape, notably cityscapes. However there are also some portraits, which give an astonishing sense of intimacy, as if you were very close to these people. Who where they?

P.R : I did know most of them. My brother studied Mandarin in Qingdao, so he had friends there. Willa was a friend who had grown up in Qingdao and so was Terry . Terry {the man gazing out a window and smoking a cigarette} had lived in New Zealand for 7 years and, when he came back most of what he knew of his home town had disappeared or changed drastically. He was struggling to reengage with his own culture and was finding it difficult to come to terms with the extent of the change. So there are a couple of personal stories in there. I have also done some portraits of people I didn’t know, such as the ones in the town square in Jinan.

I find China a fascinating place, It’s hard not to think about the William Gibson quote: ‘The future is already here — it’s just not very evenly distributed’. China makes me feel this way: some areas feel like how you would imagine London during the industrial revolution, and other places, (like Pudong’s skyscrapers in Shanghai), make you feel like you’ve had a glimpse of the future.

M.C : Last October, you exhibited a collaborative work {In Between} with your twin brother {Anthony Reed} in Shanghai, which offers a photographic dialogue between images shot in various locations. Can you tell me more about the genesis of such collaboration?

P.R : We are identical twins and we’re both visually minded, so we’ve always been very close, and discussed projects together. When we were at home, growing up, we did drawings together among other things, Anthony was a better drawer so I did photography. Actually when I was at LCC, as part of a project we were asked to look at how the internet and image based platforms like Flickr were effecting the way in which work was being produced. I decided we should both set up Flickr accounts and start to communicate visually. We experimented with taking photos at the exact same time across different continents but settled with the idea of exchanging a series of images. I would go out and take some pictures of everyday scenes that I experienced in London and send them to Anthony. He would then go out and reply to those images with his own. We continued that process until after a while we had enough images to curate a selection that best communicated this dialogue. We avoided landmarks like Big Ben or the Oriental Pearl Tower and instead decided to use scenes we experienced on a day-to-day basis, we also decided to use the same lens for consistency. We have been doing this now for the last four years. It’s a natural process for us to be engaged in, the exhibition was a great opportunity to exhibit the work and express some of the ideas behind the project.

M.C : What are your future projects?

P.R : I’m currently working on South of The River, which is looking at an area of South London along the Thames. I’ve lived in London for the last ten years, in several areas (Battersea, Vauxhall, Waterloo, Elephant and Castle and Borough), and I’ve seen these areas change quite a lot. There is a huge amount of money being poured in. I’m interested in how these places are being redeveloped and what the ultimate outcome will be. It’s really not that different from what’s happening in China, I guess I feel a need to document/engage in/respond to this process.