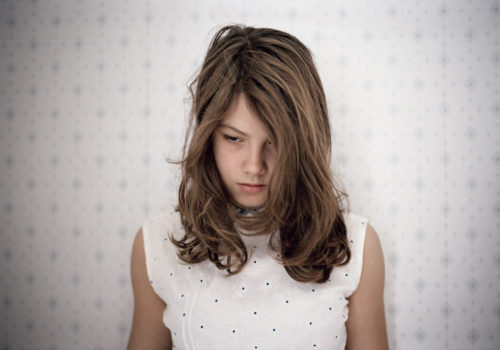 Claudine Doury will present photos from her series: Sasha and Loulan Beauty

Member of the VU’‘ agency and represented by the Galerie In Camera, Claudine Doury lives and works in Paris.

Her photographic exploration addresses the notions of memory, transition and passage, particularly around adolescence and travel, her favorite themes. She has published six monographs and produced numerous individual and group exhibitions.

In 2017, she won twice the National Photographic Commission “La Jeunesse en France” then, the Marc Ladreit de Lacharrière-Académie des Beaux-arts award. In 2004, the Niépce Award rewarded all of her work. In 1999, she received the Leica Oscar Barnack Award and a World Press Award for her series Peoples of Siberia.

In Sasha, she portrays a teenage girl. Between dream and reality, she captures this complex passage from the world of childhood to that of adulthood with great delicacy. Nature is omnipresent (forest, water, fields, snow …). A dreamlike world, strange and mysterious, attractive and intriguing at the same time. How not to let yourself be touched by these images full of poetry.

“An aquatic world too, as for a rebirth whose purity will be adorned with white dresses for fairy tale parties from another age. We will be able to walk on the waters, at least have the illusion of it, as we dreamed, when we were younger, of flying. We will be able to come out of the water, in the company of the girlfriend, the friend, the double, capped with green algae, who became the time of a swim characters without identity in an untouched nature. There will be the temptation of Ophelia when the water, perfectly still, mirrored, will reveals only the face and a certain gravity. As often, you will feel that everything is happening inside, that it is inexpressible … ”

“… We will be able to play, on the verge of the nightmare that watches over all the dreams, half-bury ourselves in the large field of grass, then become another and linger, seriously, to contemplate the slugs which do not not really race. We will detain the fox but we will flee in a great flight of white dust, in fractions of time.

Then, one day, we will cut the blond braid and we will keep it as a photograph preserves the image of the face in the mirror. Her face ? Another face? Time of doubt. All this is only possible because the light and the colors, soothed, surround everything with a skilful monochrome in which greens dominate alongside browns. Because, obviously, these images are accepted, but the calm and the absence of anecdote, a tense rigor and an indisputable beauty offer a sensitive appearance: one that conceals an inner turmoil and heartbreak.

This is how nothing allows our voyeurism to take hold and we remain there, both fascinated and frustrated, as we are at this age in life, in this exciting and frightening interlude, and we are either the one who experiences the transformation, or the one who looks at it while trying to put it into shape without describing it even though she is also an actor in it, or else we are perfectly outside and watching. An alliance of mystery, magic, indescribable time and sometimes poisonous beauty set up a world in suspension.

We are sometimes tempted to get lost in it, but we quickly find that it is impossible for us to get into it. We have, no doubt, too quickly forgotten that we went through this and did not know how to preserve it sufficiently. A gravity, a slight sadness, invade us then. The leaves turn a little yellow at the edge of the pond. It’s too late. The time has passed.” Christian Caujolle

“It’s the story of a slow disappearance, in the sands and in time, the end of a world, a journey through post-Soviet Central Asia and Chinese Xinjiang. I had read Djamila by the Kirghiz poet Tchinguiz Aïtmatov, and I dreamed of the kolkhozes lost in the steppe and their peoples, Uzbeks, Kazakhs, Kyrgyz, Karakalpaks …

From 2002 to 2005, I was able to visit the Aral region of Kazakhstan, Uzbekistan, Xinjiang and the banks of the Issyk Kul in Kyrgyzstan.

Loulan beauty testifies to these men from the middle of the worlds, heirs to submerged kingdoms, fishermen without sea, children who dance to bring their parents back to work far away, Lola who dreams of America, men who listen to the sands sing , and girls with a thousand braids, the same as those found on Loulan, their four thousand year old ancestor. »Claudine Doury