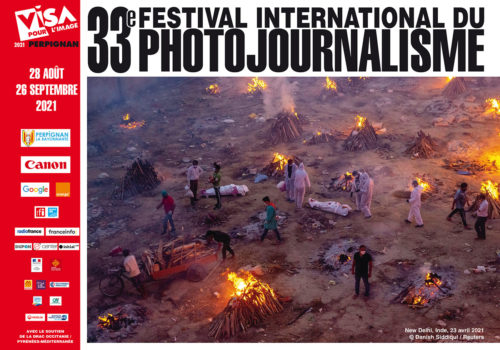 We certainly missed the light of the projectors on the giant screen in Perpignan, but in September this year the lights should be on again for the evening shows at Campo Santo.  Six programs will be screened featuring around one hundred of the best stories produced by photojournalists over the past year.  The reports sent in from so many different countries provide clear proof that the world has not ground to a halt.
While the pandemic has turned societies upside down, and now stands as the major worldwide event of the early 21st century, there have been other crises, as seen for example in Myanmar, Nagorno-Karabakh, Ethiopia and Colombia where Covid-19 has not stopped the relentless course of events and conflicts.  As is always the case, photojournalists have been present there, providing invaluable reports on these chapters in history.  Their work is of course the result of talent and dedication, but we must not overlook certain outlets in the printed press and agencies which, despite an increasingly difficult financial situation, both in France and other regions, have continued to secure a reliable supply of fact-checked reports by sending their own journalists into the field.  Without them, most of the exhibitions programmed at the Couvent des Minimes and the Église des Dominicains would never have materialized.
In the current climate, with new forces seeking a return to the dark ages, where indignant outrage is so prevalent, and at a time when we are both victims of and participants in the circulation of misinformation together with the anxiety it produces, these reports are an opportunity for us to stop and think, thereby gaining a better understanding of the world we live in.  Here we see the purpose of the light at Campo Santo and Visa pour l’Image, for it is through greater understanding that we can allay fear.