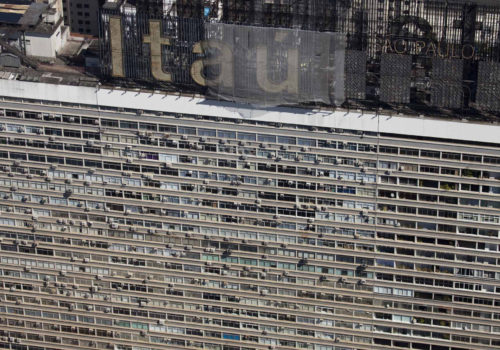 “Second Edition of Mostra Sao Paulo de Fotografia Photography is exposed in Vila Madalena, Sao Paulo’s hippest neighborhood: 30 exhibitions, 24 venues, more than 30 photographers, one popular neighborhood in the midst of renovation – Vila Madalena, one vast and unique subject (Sao Paulo), one requirement in order to exhibit: to have lived, or to be currently living or working in Sao Paulo. And, of course, to have been chosen by a Jury comprised of photography professionals (top photographers, artistic directors, etc.). That’s the second edition of Mostra Sao Paulo de Fotografia.

The Project Manager, the soul of this Mostra, is Fernando Costa Netto, a former photojournalist who has covered the war in Serbia and the second Intifada in the Gaza strip. He is the director, creator and editor of a magazine that puts photography in the spotlight, and has also since become a rich bistrot-owner. He was one of the first to believe in the renaissance of Vila Madalena, the neighborhood of the artists and the avant-garde galleries, flooded by night-time hipsters and young paulista artists. Fernando’s aim was perfect in trying to make the Mostra one of the biggest photo events in Brazil, and with one goal: to find and reveal new talents in a city that already holds numerous galleries and exhibitions, as well as many more activities in relation to photography.

Equipped with just a map of the neighborhood indicating the venues and the artists exposed, one can stroll around Vila Madalena’s alleys, though courtyards, discovering ateliers, art galleries, agencies, cafés, restaurants: every site is identified with as many posters as photographers, each with different views, presented in this giant and always effervescent city. Photographic testimonies that involve Sao Paulo’s futurism of the 1950s and 1960s (as seen by Ary Diesendruck), an architectural chaos shown in the work of Lata Cannabrava, or even in Ale Ermel’s (The Night). Bruno Cals shows his fascination for the swimming pools and diving boards of that era, while Tuca Vieira offers the photo souvenirs from Cinema Gemini, a mythical movie theater that has closed its doors for good. And of course the city, through the eyes of Arnaldo Pappalardo or Pietro Ghiurghi.

In this mutating metropolis, we also find the outcasts. Armando Prado has offered the opportunity to some homeless people to participate in a striking “Before and After” series. How these men, after showering, combing their hair, shaving and getting dressed, rediscover their dignity. And diving into the native camps in Na Lata: Ivan Shupiko has been portraying for years this underground scene, from which we find a series of large portraits, a wonderful work in black and white of Brazilian nightlife and its members. And in a different approach, there is Felipe Hellmeister’s surreal photographs of saturated poetic frenzies. Or the Polaroids by an arty collective. It’s impossible to name everything in this inevitably uneven, vast ensemble that shows us the full extent of the photographic creativity that resides in Sao Paulo.”

Lead by the success of the 2011 show, Fernando Costa Nesto has announced an even larger event for the third edition in January/February 2012.