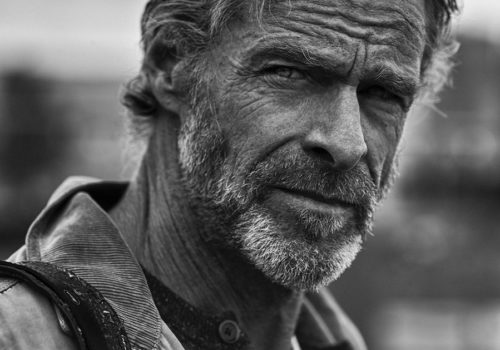 Steven Lyon has lived several exciting lives which have all added up – like a gigantic mosaic – to what he is today. A heart-throbbing, cosmopolitan, and well-educated ex-model turned photographer. He devoted his life to being first in front of and then behind the camera. Lately he has been fighting for the protection of the wildlife and is always on the lookout for the next project. After a first encounter in 2018 and then seeing his images, short films, and messages, I felt the urge to tell his story, share his personal vision of photography, and also, What’s New?

Nadine Dinter : Your life reads like a Hollywood movie script: model becomes photographer becomes director becomes wildlife activist. Let’s start with your modeling career. According to legend, you were discovered by Andy Warhol for Interview magazine, which he had just launched. Can you tell us about your encounter?

Steven Lyon : Yes, of course – people always seem to like that story. It was before I was a model. I was walking down Sunset Boulevard in Hollywood and a man asked me if I was model and if I’d like to meet Andy. Well to be honest I didn’t know who Andy Warhol was, but he gave me his card. Later, when I went to see my future father in-law, I told him about it, and he said “What, are you fucking crazy – it’s Andy Warhol!” So I called the number and went that night to the Mondrian hotel to meet Andy. Andy opened the door and said, “I’m Andy, you’re really very, very beautiful.” Andy asked me to come the next morning to the hotel pool. I did and he asked me to strip down to my Calvin’s. No problem. He shot on film, of course, and about 20 minutes later we were done. He said to call if I ever came to New York and that he had a cool thing called The Factory for artists. I probably should have gone, but never did.

Shortly after, your career took off and all the major brands and magazines were knocking at your door. Jean Paul Gaultier, Montana, Bally, Cerruti, Trussardi, Versace, were some of the clients that hired you to be part of their vision. What are your takeaways from that time?

SL : That modeling didn’t suck! It was a very different era in fashion. You did one big job or shoot with a major photographer and the buzz traveled fast. It all came very easy for me. I remember my first show season in Paris: I opened the Gaultier show and that night was on the dance floor at the Palace Club. Agents from all over would walk up and say “You – with me – now” in Germany/Spain/UK, etc. And the next day I was on a plane to Milan to shoot 28 pages for Harper’s Bazaar – it was so much fun.

How was life as a model back then? What were your highlights?

SL : I was on a plane three to four times a week. Clubbing every night and meeting amazing people from around the world. For a guy from California, I loved it. And the girls … the women around, in, and out of fashion were amazing.

Which designer and which other models did you like working with the most?

SL : That’s a tough question. I loved working for Gianni Versace. He was such a kind man and being a Versace model was tops. But I did a lot of campaigns for Claude Montana, shooting with Paolo Roversi and many campaigns also for Trussardi with Giovanni Gastel shooting – both master shooters. But I must say that shooting the Nikos underwear campaign in Chicago with supermodel Iman and Victor Skrebneski was for sure a high point. I loved Nikos and Victor. We all did this campaign twice a year for five years … mostly naked!

At some point, you decided to switch sides: you left the full-time modeling business and became a photographer yourself. What triggered this decision?

SL : Actually, I retired from modeling and moved back to LA from Paris in 1993 to be an actor. I had done a few movies and theater in the ‘80s and loved all of it. I started shooting as a hobby on the weekends. I’d shoot models I knew and some fashion but mostly Playboy models. Needless to say, shooting nudes mostly in the desert was common for me. I loved the way Herb Ritts and Greg Gorman and Skrebneski approached nudity. I always loved Helmut Newton and Peter Lindbergh, from the start. When I decided to actually give fashion and photography a try, I knew Paris was where I had to go, and I also started shooting more fashion than nudes. I had dinner with my close friends and said, “I’ll be in Paris in a year.” I boarded a plane exactly a year later. Didn’t return to LA for five years. It took me that long to begin to shoot for good magazines. I didn’t want to come back with nothing to show. Needless to say, I wanted to go back to Paris and stayed another 15 years before moving to New York. I miss Paris and I’m sure I’ll move back … but Berlin could be cool.

What was your first camera and what do you prefer shooting with today?

SL : A Nikon f4 35mm film camera. I must have shot 1,000 rolls through it before my house was robbed and it was stolen along with all my cool leather jackets given to me from my modeling days. I took the insurance money and moved up to medium format. I know Peter and Herb and Bruce all shot on a Pentax 67. So I bought two and moved to Paris. I now own 12 of them (they break a lot). I also shoot with a Mamiya RZ67, Hasselblad 503CW, a Linhof 4×5 Master Technika, and a Sinar P2 8×10. Now I’m shooting 35mm again with a Canon EOS 1V. I use that in Africa a lot shooting wildlife. When I shoot digital, I love the Leica S and Leica monochrome.

Having worked with some of the most iconic and famous photographers such as Giovanni Gastel, Mario Testino, Herb Ritts, and Guy Bourdin, whose work do you find most inspiring?

SL : I love photography and photographers. I also drew a lot of inspiration from the cinema, especially film noir and German Expressionist cinematography. For sure I was very inspired by Peter Lindbergh, Sante d´Orazio, and Herb Ritts along with the original master Helmut Newton. I’m also a huge fan of Peter Beard and the rawness of his wildlife and admire the life he led. I’m not such a big fan of the new dreamy, over-retouched wildlife images most are doing.

How do you plan your set and how do you choose your models?

SL : My next vocation in life with be film directing. So it’s no surprise I like movie sets. My favorite jobs in my career were all shot with Cinema HMI and Tungsten lighting. Working with a DP to design a look of a set is the way I like to work. As for models, I love a cinema actress type or classic beauty.

When I shoot men, I shoot men like a man. No make-up or retouching men and very little on women. I would have loved to have worked with Isabella Rossellini or Catherine Deneuve. I’m still in love with all the superstars from the ‘80s and still hope to work with them. So much more interesting than shooting influencers! What the fuck even is that? I hate that word: “influencer”.

Some years ago you also started shooting fiction films and documentaries. And you fell in love with Africa. You have captured breathtaking wildlife photographs, visited nearly forgotten tribes, and founded the nonprofit organization Lyonheartlove. Tell us about your mission, this special passion, and your next goals.

SL : Well, I started filming my documentary Something that Matters in 2013. It’s a film about a 1,000k trek across Africa discovering the harsh truths about the poaching crisis. It’s been a journey and it’s still in the making. I originally walked the 1,000k with an amazing guide and crew. We finished that but I ran out of money and have been swimming uphill since to get funded to finish. I recently found an investor, so the film is back in production. Because of the time gap I’ve decided to go back to Africa and fill in the blanks with my team and also with the ongoing slaughter of the rhinos and poaching in general. Funding is still needed but I’m optimistic now it will come. My nonprofit www.lyonheartlove.org was founded to make this film. Now I have a few other projects in store that will help raise funds for wildlife.

What are your next travel plans and project, once the covid-19 travel bans are lifted?

SL : Africa! Going back to finish filming and take a little wildlife photographic safari. A stop in Paris and a production there for sure … and Berlin.

Any recommendations for the new generation of photographers?

SL : “Fix it in post” should be wiped from your vocabulary. Buy a film camera and learn to shoot film and read a light meter. Do your own postproduction.

But mostly, find your voice. The hardest thing for a photographer is to develop your own signature style. It took me many years and thousands of rolls of film … I like to think I’ve developed it now.