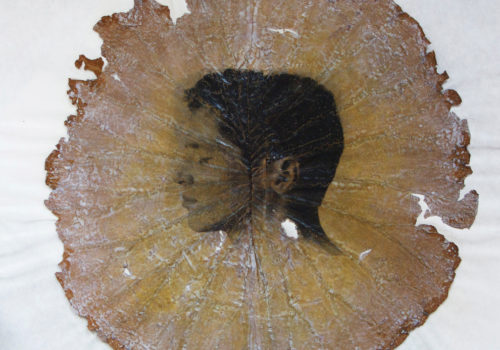 Accra Shepp has developed a unique process in his photography-based practice over the years, a captivating transformation of preserved tobacco and certain mammoth indigenous leaves into photoreactive materials. Onto these tanned, veined, physically huge but texturally fragile surfaces, Shepp enacts photographic portraits of the laborers who work these crops and farmlands. By grafting their images in such a physically integrated way, the image seems to emerge from within the leaf.

Shepp has stated that, “Tobacco has a long and complicated history from its cultivation through slave labor at the founding of this country to its modern cultivation with the use of migrant labor. I wanted to see where tobacco comes from and who grows it.” So, he went on a road trip to investigate. After encountering some initial resistance, the images in this series were made on farms in Kentucky and Georgia, and in Indonesia. The portraits of the farmers and the farm workers (an almost entirely immigrant-based labor force) are life size and are printed on the (surprisingly large) tobacco leaves that they themselves grew.

Shepp will show a selection of such works made in recent years, silver gelatin emulsions on leaf, which are then mounted on paper. An earthen palette and leathery, autumnal and ritualistic aura give each piece the singular presence of a rare, painterly object. There is an evocative, elusive, emotional energy that radiates from their material mysteriousness. At the same time, being part of larger research and socio-economic critique, the pictures embody journalistic documentation, individual narratives, and a centering of disremembered history.

A majestic tableaux work, Castle Portrait, depicts a related scenario in an imposing black and white photograph of an often-plundered manor house’s great hall still containing a few ragtag family portraits. A mural-size image of this haunted interior is flanked by four leaf-printed portraits of its remaining residents. The juxtapositions between grandeur and entropy, romanticism and ruination resonate with the laborer and the agricultural leaf works in that in a very real sense this cumbersome house is their land, and their symbolic, difficult work is cultivating its living history.

Accra Shepp has exhibited extensively in galleries and museums such as the African American Museum, Philadelphia, the Victoria and Albert Museum, the Whitney Museum and the Brooklyn Museum just to name a few. His work is in public collections such as the Victoria and Albert Museum, London, the Museum of Modern Art, New York, the Museum of Fine Arts, Houston, the Art Institute, Chicago and the Whitney Museum, New York among others. Shepp lives and works in New York.