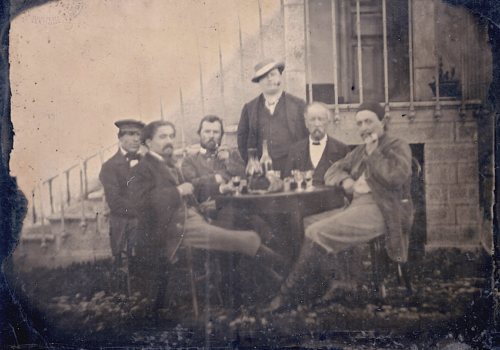 On a December morning, two somewhat hesitant people stood on the sidewalk of the Boulevard Haussmann, looking for a pop-up gallery we had opened for a period of six months next to the Musée Jacquemart André.

They had traveled over 800 kilometers, inquiring with different people who discouraged them and said their search seemed impossible. Perhaps the most difficult part was finding me, but thanks to their perseverance, and the kindness of a neighbor, Frédéric, the meeting happened.

The photograph they had brought to show me was small, dark and rather difficult to see. Six characters were around a table. The light was pale, perhaps it was a winter afternoon.

They told me, still hesitant, that they thought they recognized the people in it, artists in whom they had long been interested. They were collectors and liked the painters of the late 19th century, in particular the neo-impressionists. They also said it was possible that one of the figures around the table was someone whose true face had never been seen.

I tried to avoid making a judgment too quickly and considered how I should react. I didn’t want to start doing what Americans call “wishful thinking,” that trap into which collectors and researchers fall, where their reasoning is governed only by what they want to see.

I asked them if they could describe the circumstances in which they had discovered the object. To my delight, they were extremely precise, talking about their quest for old paper, old books and old trinkets. Sometimes what’s left in a house wouldn’t be worth the cost of moving to an auction house so everything is sold on site. That’s where the photograph had come from, two years before. And they remembered perfectly having found a similar photograph, manuscripts, a letter from a major poet of the time, and the archives and catalogue of a bookseller named Ronald Davis.

They said his name without any particular emphasis on it, and it was as though a beam of light had shone down on me. Ronald Davis’s name had been long forgotten, but I had recently encountered it by chance while researching a portrait of Charles Baudelaire.

Davis had been a figure in Paris in the 1920s, a model for many sellers of old books. He was known for being an editor and friend of Paul Valéry. One of his clients was the wealthy Myriam de Rothschild.

Once I was reassured about its provenance, I could concentrate on the object, a strip of black cardboard slightly whitened by a photographic emulsion. I offered to help them in their quest and discussed the the best way to go about it. They wanted to hold an auction. [It will take place on June 19th in Brussels. — ed.] If the figures are identified, we’ll have established a valuable reference from a few comparable portraits.

We set a date and agreed on a method. First we made a list of everything we had to check, and everything that could send us down a wrong path. We opted to adhere to Ockham’s Razor: if we felt comfortable enough with the context, the best solution would be the simplest.

We split up the work and I got in touch with several friends to help us move forward on the following questions:

First, try to understand the photographic process through a material analysis.

Second, Identify all six people in the photograph through physical study.

Third, research the place and time the picture was taken.

Fourth, understand who the photographer was and what his intentions were…

The result of the search were favorable and we were able after some hesitations to identify the compagnons of Vincent Van Gogh, ,and to understand the context of the picture .

This picture will be sold during auction on june 19th, 2015 in Brussels.