The descendants of the survivors of the Herero genocide, photographed in color by Stephan Gladieu 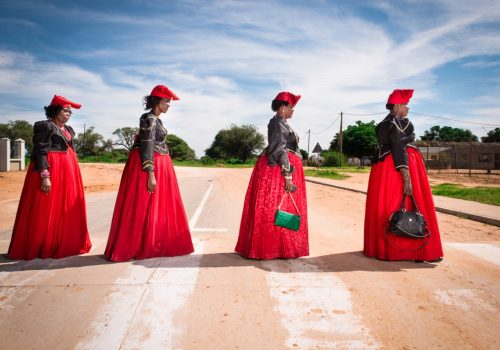 The French photographer Stephan Gladieu traveled the world to find unusual stories and bring back testimonies: of doomed salt miners, the widows of the City of Krishna, Native Americans and Mai-Mai tribes… With a great sense of humanity, he has also photographed the annual commemoration of the Herero people, an ethnic group in Namibia, whose fate is as tragic as it is little known. The Herero and Nama massacres perpetrated on the orders of the German general Lothar von Trotha in German South West Africa (Deutsch-Südwestafrka, currently Namibia) in 1904, is considered to be the first act of genocide in the twentieth century. It resulted in the deaths of 80 percent of native rebels and their families (65,000 Herero and nearly 20,000 Nama).

The portraits, which make up this series of photographs devoted to the descendants of the massacred people, are an invitation to discover images done in lush colors, bordering on genre painting and surrealism. Each photograph is an ode to color; every face is a hymn to life; and every setting is a naturalist fairyland. Full-length individual or group portraits show people dressed up for a parade. Men wear decorated military uniforms bedecked with charms, animal skins, and other attributes of retired hunters, whereas women are robed in harlequin dresses, from flamboyant blues and reds to all the colors of the rainbow, and sport Victorian coiffures. The collection as a whole is decidedly festive, where kitsch vies with eccentricity, like African firefighters, enthusiasts of “no limit,” who turned clothing into an art.

Stephan Gladieu captures a portrait of a generation that hasn’t experienced occupation but which continues to bear its burden. A testimony to a nearly forgotten crime against humanity, these images are also universal in scope. In their suffering and their struggle, these men and women at the other end of the world whisper in our ear: there is no forgetting.