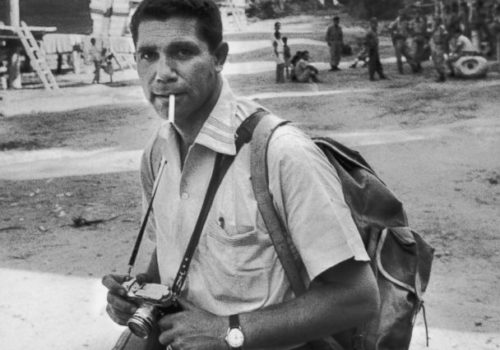 He was known for his photographs of celebrities, wildlife and politicians. But his most famous image remains an iconic one taken at the 1968 Olympic Games: two African-American athletes on the podium raise their fists in protest against racial segregation in the United States. The photograph was seen around the world. On Monday, December 30, 2013, John Dominis died of heart disease at the age of 92.

At Life, Dominis was one of a handful of photographers whose work could be depended on. He photographed subjects who rarely let the media get close. In 1963, Steve McQueen invited Dominis to follow him around for a month. In 1965, Frank Sinatra allowed the photographer to enter his inner circle, where Dominis attended private parties and, famously, surprised the entertainer while he was shaving, bare-chested, with a towel wrapped around his head.

John Dominis was what is known as an all-terrain photographer. In The New York Times, Richard B. Stolley, former deputy editor of Life, said that Dominis was one of the most modest “great photographers” he had known. “He had his finger on the trigger all the time… while maintaining a remarkable calmness.”

Before Life, Dominis studied cinema at the University of Southern California and served in the army as  combat photographer in Japan. Later, he returned to his documentary roots and  covered  the wars in Korea and Vietnam, wild animals fighting to  death in Africa, the Woodstock music festival and ballet dancers.

In 1996, he spent several months in Africa for the Life feature “The Great Cats of Africa“, which was later turned into a book. After Life closed in 1972, Dominis became at photo editor at People magazine in 1975 and, later, Sports Illustrated, from 1978 to 1982. He began working freelance and earned a living with commercial photography, with a focus on culinary photo for cookbooks.