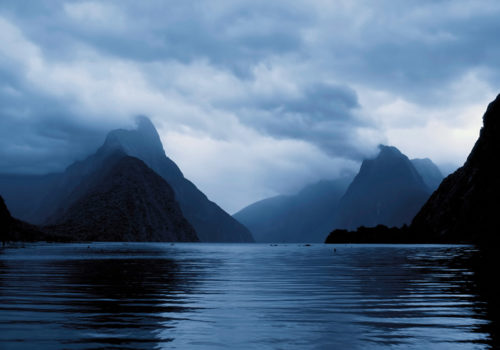 Having taken photographs in both hemispheres there is no doubt the light in Australia, and New Zealand, is very different to the softer light in Europe, or the light of neighboring Asia, where pollution in the atmosphere often masks the horizon and leaves the air thick with noise.

Here we still have the benefit of relatively clean air bringing a true clarity of light, which Japanese-born photographer MikiNobu Komatsu says “is vivid and obvious. This “rich and strong light” captured Komatsu’s imagination when he first came to Australia in the late 1970s. Since that time he has created a vast body of work focusing on landscapes in both Australia and New Zealand the latter of which is the subject of his retrospective exhibition currently on show in Sydney at Black Eye Gallery.

Comparing the light of the Antipodes to his homeland, Komatsu says, “Here the light is much more visible. Every moment is so interesting, the way light changes from early morning to late afternoon and sunset…it’s such a different quality. When I arrived in Australia for the first time in my life I started to look at what was around me, at my environment. I became intrigued by what I saw and that’s what inspired me to start taking photographs”.

For the past 30 years Komatsu has focused his lens on the environment, particularly drawn to remote vistas where sky and earth meet in soaring mountains and vales, where rivers reflect the sun in rich gold tones and where frosty nights and clear days bring endless visual stimuli.

“On the south island of New Zealand they have these graded rivers, where as the sun sets water can look like it is floating,” he says describing one of the images in the exhibition ‘Rakaia River at dusk’. Shot from a fixed-wing aircraft Komatsu says, “I was so lucky to be in the right position at the right time that day. I like to be mobile and while I have shot landscapes by setting up my camera on a tripod and waiting for the right moment, I prefer to go to the ‘image’rather than wait for it to come to me.”

While much of his work is opportunistic, Komatsu also conducts research to find particular locations that may present a unique opportunity particularly in winter, his favorite season. We talk about the image entitled ‘Hoar frost covered farm in Twizel’. “I wanted to photograph hoar frost, which is a frozen mist. I had researched this particular area on the south island and knew that this area was known for hoar frost. As I was driving late one afternoon it became misty so I decided to stay overnight on the chance that in the morning there would be hoar frost. That night the temperature dropped so much that mist got stuck onto the trees. In the morning I found this scene where the light was filtered enabling me to capture this cold blue landscape where the trees were blanketed with hoar frost”. The delight of discovery is obvious; this was a magic moment.

The exhibition at Black Eye features around 25 works, which are taken from Komatsu’s self-published book ‘Light Moods South’. The book features Haiku poetry alongside each image. “I like the simplicity of Haiku, but it also has depth, what you could call complex simplicity, so it complements my photographs because they are both simple and layered also.”

In closing he says, “I like to think that my photographs convey the emotions I felt shooting at that moment when I encountered such beauty in nature”.