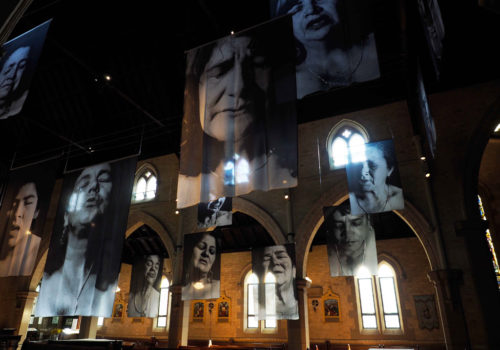 From the rafters of a church in the backstreets of inner Sydney hang swathes of silk. They gently sway in the breeze as it floats through the lead light doors that sit ajar inviting passersby to enter this house of worship. Lit by the sun that streams through the stained glass windows, the fabric twinkles as if infused with shards of crystal.

These pieces of fabric are not flags or religious motifs. They are black and white photographs of women who have experienced unimaginable horrors, having been forced to watch their loved ones murdered by guerrillas and paramilitaries. This moving exhibition “Sudarios (Shrouds)” is by Colombian photographic artist, and social anthropologist, Erika Diettes and is one of the centrepieces of this year’s Head On Photo Festival in Sydney.

Around the corner from St. Canice’s church at the Stanley Street Gallery is an exhibition by Swedish photographer Johan Willner – “Boys Stories”. These photographs explore the concept of memory and how it changes over time. At Stills Gallery in Paddington American photographer Mary Ellen Mark’s iconic black and white photographs hang alongside of Australian photographer Lisa Garland’s portraits, both photographers bringing unique insights into those who live on the margins of society. In a large outdoor space known as the Paddington Reservoir American photojournalist Ben Lowy’s work is on show along with National Geographic’s Chris Rainier. Here also are the works of the finalists in the Head On Portrait Prize. At the Danks Street Gallery complex multiple spaces feature a diverse range of work from exhibitions shot on plastic cameras and mobile phones. There are also multimedia works. At the famous Bondi Beach Pavilion a group of artists show what can be done with mobile phone applications in another exhibition that plays with memory.

The diversity of the photographic medium is what Head On Photo Festival is all about. It is a festival of photography in all its forms, designed to celebrate the egalitarian nature of photography, free of the pretensions of labels, a true feast for the eyes and soul.

Over the Festival’s opening weekend I saw an amazing variety of works from a diverse group of artists and you can read about a number of the shows I saw in today’s bulletin. The weekend began with the opening night festivities and the announcement of the Head On Award winners. More than 4000 photographers from around the world entered the competitions this year for the Landscape, Mobile and Multimedia awards, with only the Head On Portrait Prize confined to Australian entrants.

As one of the judges for the Head On Landscape Prize along with award-winning photographers Chris Rainier and Murray Fredericks, I had viewed hundreds of images in the preceding weeks. Not knowing who the photographers were, as is the premise with all the Head On Awards, I responded firstly to the emotional impact of each image. To see the landscape interpreted in so many styles and through so many eyes was a wonderful learning experience for me, and speaks to the heart of my interest in photography as a conduit for understanding. While there were many synergies each of the judges brought something new to the discussion. As a critical thinker, being a judge was one of the most enjoyable aspects of my involvement in this year’s Festival.

Festivals such as Head On also bring together the photographic community and over the three days I spent in Sydney I reconnected with many photographers I’ve met from around the globe as well as making new friends. I had the good fortune to engage in extended conversations with James Dooley the photojournalism council administrator for the Alexia Foundation in New York, to speak in depth with both international and local artists about their work and to spend time with the Head On team led by Festival Director Moshe Rosenzveig and General Manager Anita Schwartz.

On the Sunday I was part of a panel discussion on the topic “Do we still photograph with passion?” My fellow panel members were James Dooley, Erika Diettes, Johan Willner, Australian photographer Jonny Lewis, Chinese-Australian photographer Tami Xiang, consultant Sally Brownbill, American photojournalist Ben Lowy, Moshe Rosenzveig and Kristie Galea of Olympus, the Festival’s major sponsors this year. This interactive session drew on all of the panellists’ experience, ignited debate and infused everyone with energy and enthusiasm for the future. It was agreed at the end of the two-hour session that despite the shifts in the photographic landscape, and the continuing demise of the traditional publishing platforms, professionals still harbour enormous passion for the medium; embracing change is part of the practice of every artist.

Olympus kindly lent me an OM-D E-M1 for the weekend to trial. I’ve shot on Olympus cameras all my life, and still have my OM-1 film camera and its lenses that I used when I was studying photography. The E-M1 is fantastic, particularly shooting in low light. Fast, incredibly light, and unobtrusive, the E-M1 allowed me to capture the weekend’s festivities and immediately upload them so I could share them with my blog readers and colleagues. To say I like this camera is an understatement and its connectivity and ease of use has quickly made it an essential part of my kit. Its new home is my handbag so it can be with me everywhere, everyday.

Overall Head On Photo Festival was an immersive experience that has given me so much food for thought that I will not be ‘hungry’ for months to come.

Head On runs until 8 June across multiple venues.