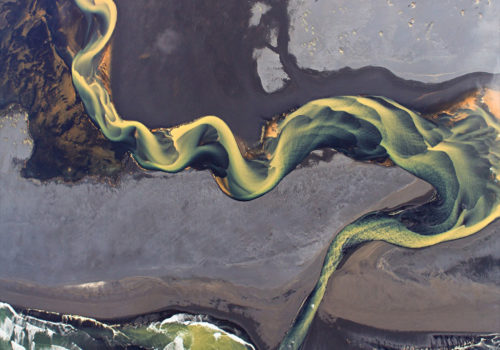 A holiday to Iceland in 2013 provided an unexpected opportunity for 26-year-old Perth photographer Jarrad Seng to experiment with aerial landscape photography the outcome of which is a stunning collection of aerial photographs of Icelandic water flows that are reminiscent of abstract paintings.

After three weeks of touring by car along the coastline of Iceland, Seng was in his hotel room one night flicking through images on the Internet when he came across a series of aerial images by a Russian photographer. “They looked so surreal and I couldn’t believe it was planet earth I was looking at. Those images planted the seed in my mind,” he explains.

It didn’t take Seng long to find a pilot willing to take him up, but the weather was inclement and it wasn’t until the last day of his trip that he was able to get a clear view. “That day we flew around the southwest coast of Iceland for six hours at an altitude of about 1000 feet,” says Seng. Battling airsickness and the bitter cold of having to shoot through the open window of the “tiny two-seater Cessna,” Seng kept himself centred by focusing on the extraordinary landscape below.

“The pilot would tilt the plane downwards on my side and I’d hang out the window and shoot straight down. I’d never done anything like that before, and hadn’t worked in landscape so it was exciting to be doing something so new and different.” To date Seng has worked predominantly in live performance with a focus on the music scene.

He tells that shooting the Icelandic landscape from above was a process of pure experimentation. After discovering the view through his Ray-Ban sunglasses was more impressive due to their lenses, he fixed a polarizing filter onto his lens to amplify the drama in his shots.

Of the choice to shoot in a more abstract style Seng says the decision was almost made for him once he was in the air and viewing the landscape from a bird’s eye perspective. Using his telephoto lens he was able to capture the intricacies of the patterns the water was making on the ground. “This whole volcanic region with its glaciers and mineral deposits is amazing and the textures and the colours of the patterns are all formed by the flow of water”.

In these images Seng has captured both the visual and allegorical flow of the water, which paints a vivid palette across the landscape. Indeed these photographs do look like paintings and their textures could be daubs of paint on canvas. For this exhibition they have been printed on metallic paper, which enhances the glow of the almost iridescent hues.

The experience of shooting in Iceland has piqued his interest in aerial landscape photography. Seng intends to focus closer to home on his next project with the idea of exploring the Kimberley’s in the north east of Australia. Although he says, “After Iceland, which was so fantastic, the next place I choose may not be as spectacular”. But he’s prepared to find out.

EXHIBITION
ALLTERVATN
by Jarrad Seng
Part of Head On Photo Festival
Until 31 May, 2014
The Arthouse
275 Pitt Street
Sydney
Australia