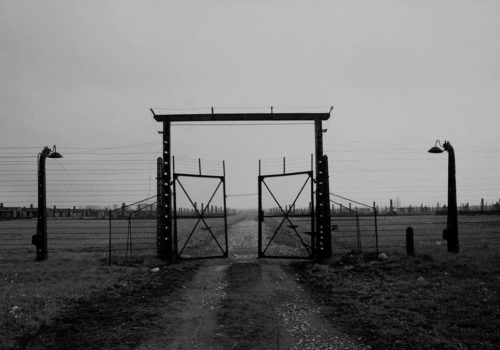 The Schumacher Gallery at Capital University is hosting an exhibition titled “A Requiem: Tribute to the Spiritual Space at Auschwitz” by Susan May Tell until December 11. This exhibit is organized by art2art circulating exhibitions.

This haunting exhibition by Susan May Tell hosts 17 photographic images, 6 x4 feet each, gelatin silver, without words, titles, or even frames. These images stand as witnesses to the horrific scene that was Auschwitz. Tell explains that her imagery meditates on the idea that “like other sacred grounds that are decaying, Auschwitz today is disappearing and raises questions about whether places of this kind should be restored and the importance of memory and commemoration. Equally important to my artistic vision is my commitment to Auschwitz as a meditation on decay and memory.”

In the accompanying book Susan May Tell wrote: “In Auschwitz, I felt the presence of its ghosts guiding me, guiding my camera, and was then, and continue to be now, moved to share the tragedy of this place through the images I saw through my lens.

I arrived there almost by happenstance. While planning a trip to Prague and Budapest, I learned that an overnight train goes from Prague to Krakow—and from there it was a short local train ride to Auschwitz.

I walked the grounds in silence, in meditation, photographing the aesthetics, the mood, the sense of foreboding—and tried to capture the energy that lives in that space.

Hopefully visitors will find these images reveal the presence of unspeakable horror, convey the ever-present pathos of desolation, and give a real sense of the large scale of this death camp.”

The book pairs photographs with lines of poetry by Stanley Kunitz, the 1995 Poet Laureate of the United States of America.

Previous stops of this traveling exhibition were The Museum of Art | Fort Lauderdale (now the NSU Art Museum Fort Lauderdale) and the Griffin Museum of Photography where Requiem was reviewed by ARTNews, Boston Globe, Sun-Sentinel and the Palm Beach Post among many other publications.

The exhibit is free and open to the public. The Schumacher Gallery is located on the fourth floor of Capital University’s Library.

Susan May Tell : A Requiem: Tribute to the Spiritual Space at Auschwitz