Steidl : Mary Ellen Mark : The Book of Everything 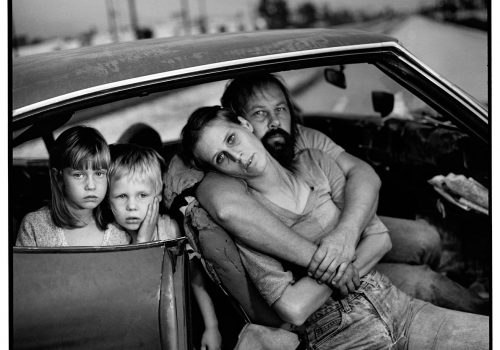 Conceived and edited by film director Martin Bell, Mary Ellen Mark’s husband and collaborator for 30 years, The Book of Everything celebrates in over 600 images and diverse texts Mark’s extraordinary life, work and vision. From 1963 to her death in 2015, Mark told brilliant, intimate, provocative stories of characters whom she met and engaged with—often in perpetuity. There was nothing casual or unprepared about Mark’s approach; she unfailingly empathized with the people and places she photographed.

For this comprehensive book Bell has selected images from Mark’s thousands of contact-sheets and chromes—from over two million frames in total. These include her own now iconic choices, those published once and since lost in time, as well as some of her as yet unpublished preferences. Bell complements these with a few selections of his own. Along with Mark’s pictures made in compelling, often tragic circumstances, The Book of Everything includes recollections from friends, colleagues and many of those she photographed. Mark’s own thoughts reveal doubts and insecurities, her ideas about the individuals and topics she depicted, as well as the challenges of the business of photography.

“I didn’t have the happiest home life or childhood, so I think that gave me a feeling of justice and passion for people that don’t have all the breaks. I think it was important to me to be free and wander the world and not have a family. I don’t have kids.

I think if you don’t come from a happy home, maybe you don’t want to tie yourself down. I always wanted to be completely free. Even from the time that I was like eight years, seven years old, I remember walking home from grade school thinking, When am I going to get out of here? I’ve got to be free. So the freedom was always a major thought for me, a major plan.” MARY ELLEN MARK INTERVIEW FOR KOBRA SVT (SWEDISH NATIONAL TELEVISION), 2010

The images of Mary Ellen Mark (1940–2015) are icons of documentary photography. Her 20 books include Ward 81 (1979), Falkland Road (1981) and Indian Circus (1993). Her last book Tiny: Streetwise Revisited (2015) is a culmination of 32 years documenting Erin Blackwell (Tiny), who was featured in Martin Bell’s 1985 film Streetwise and Mark’s 1988 book of the same name. Mark’s humanistic work has been exhibited and published in magazines worldwide.

Mary Ellen Mark: The Book of Everything

Black and white and color