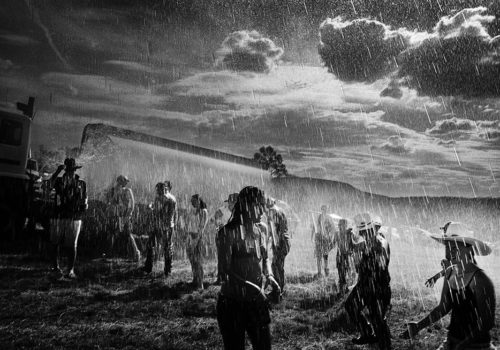 First published in 2013, Minutes to Midnight sold out the day it was released. And with good reason: Trent Parke, author of the extraordinary The Christmas Tree Bucket, is one of the most talented Magnum photographers . His color and black-and-white photographs can be wild, poetic, ultra-realistic and mysterious, as seen in this reissue featuring ostensibly unrelated observations made during his 90,000-kilometer road trip across his native Australia in 2003. Parke documented the journey in a highly ambitious way, presenting a nation struggling to forge its own identity out of several unique cultures. Combining nostalgia, romanticism and realism, Minutes to Midnight shows an intense and anxious Australia. This dark visual tale is touching one moment and disturbing in the next.

This duality is proclaimed from the first pages, in which this poetic image of a round lamp scattered with butterflies precede the masked faces of children hidden in a campground, or where later the frenzy of shopping streets of a big city is opposed to the misery of a campaign. This contrast can be found throughout all the book – images of men but also of animals or objects: a dragonfly caught in a spider web, beautiful hair in the wind of a teenage girl in a field, white sun silhouette of an old man, a squirrel flashed in flight, jellyfishes, children’s cries, a frenzied kiss. A dizzying succession of photographs each more beautiful than the others, suggesting in turn love, death, pleasure, loneliness, suffering, welfare.

This collection of photographs is like a ballet. While he remains fixed, Trent Parke dance. With the elements, with the feelings, a dance with life. Moreover, in his work, there is always one step between photography and music. “I’ve been influenced by all sorts of things,” Parke said in a 2007 interview. “Music videos have been great. There is this Icelandic group Sigur Rós – their music is just very sad and melodramatic. Nine Inch Nails and Radiohead and those sorts of bands and their cutting-edge film clips have influenced me. They have this kind of dark, dreamy quality and I suppose that was what I’m trying to evoke. But, to be honest, I don’t really realize all this when I am shooting because the stuff inside me and the stuff outside me kind of flows through me into the pictures. Most of the time I’m in another world.”