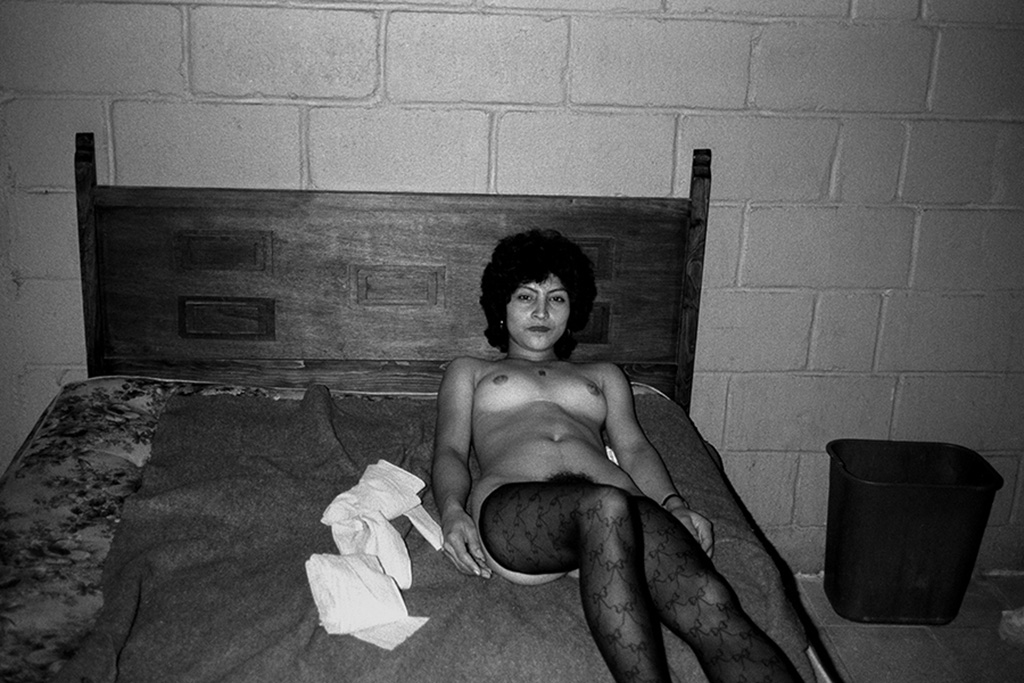 What Scot Sothern was doing was…reportage from another universe. His early pictures, the first twenty years’ worth are snapshots from trailer trash hell, a life you never wanted to see made visible and offered up for your eyes. Living evidence of the underbelly, Scot Sothern in those days was a celebrity photographer on crack with his camera pointed at a dark and different reality.

But that’s not the whole story. The Scot that took those pictures was an alcohol and drug fueled younger man. The Scot of now is a thoughtful soft spoken bright eyed survivor, his late nights in the cities alleys long behind him but his desire to explore what happens when people and cameras meet in an unexpected fashion remains.

Scot sits on his upturned red plastic bucket in the heart of the Hollywood Boulevard traffic calling out to the passerby’s “Hey, lookatme…hey!” and snapping pictures with his disposable film camera. He keeps a set of street clothes in his car for these expeditions, shabby and worn. He wears them to make it seem he is a homeless guy taking your picture instead of the other way around. The tourists streaming down the boulevard are for the most part bemused or unnoticing. But every once in a while they engage, they return the invitation, they scowl or raise a finger or they smile. They become a person out of the mass and for a second they are…there. Scot has always asked the people in front of his camera to be “there”. In return he has treated them as real partners in the picture. His pictures are sometimes hard to look at but not because he has an attitude about his subjects, he just lets them be themselves in the world they live in…and then he brings them to us to think about.

After many years working in obscurity Scot started to get the art worlds attention a few years ago. Now with two books published, a regular column for Vice and a new show of his vintage prints just opened in NY he is confronting the distance between who he was when he did his early work and who he has become since then. I sat down recently with Scot to talk about that.

So what do you see when you look at the old work?

Composition, light, exposure. I see all the little corrections I can’t go back and fix. I see my younger more screwed-up self in the older pictures and I see an empathic look at the plight of the born losers. Sometimes looking at my pictures of life on the down-low I get nostalgic and it all seems oddly romantic.

What has been the biggest change for you over the years?

SS – In the late 1980s I had a physical hurdle—the byproduct of a motorcycle mishap—that slowed me down and limited my mobility. That was a big change. I got married in 1991 for the final time and I was a stay at home father for a few years. I read a lot and I learned how to write and I collected rejection slips all through the nineties. In 2011 I got my first show, Lowlife, at the drkrm Gallery in Los Angeles and with that I started getting a bit of notice. I published a book, Lowlife, with Stanley/Barker in the UK and then a memoir, Curb Service, from Soft Skull Press. Now I’m making pictures and writing stories and getting paid for it. The biggest change for me is that I’ve finally become functional. The world is more fucked up than before but I’m feeling pretty good.

How is the street different now?

It’s still depressing and still kind of beautiful, especially at night. Street people don’t trust people like me anymore and with good reason, they’ve been over-exploited and I think they feel shamed for it. In the sixties and seventies we had hobos, hippies, and druggies. In the eighties when I made the Lowlife pictures I saw more rough trade and a lot of idiots.   Now we have damaged and misplaced people lining the downtown gutters like fast-food wrappers.   It’s much more out-of-balance than before.

How have your pictures changed?

In my early twenties I made a living as a run-of-the-mill portrait photographer. I started with big cameras and studio lights and made funny faces to get people to smile. At some magic point I decided to take a more artistic approach to photography and consequently stopped making much of a living. I’ve worked with most all of the different types of cameras, films and processes, and don’t really have a favorite. Currently I’m using disposal film cameras. I’ve always had kind of a fuck-you thing going on and that shows up in most of the work, old and new.

Something about the current project?

What can you tells us about your show at Daniel Cooney Fine Art in NYC?

At the end of the eighties I had the negatives from six years of photographing street prostitutes and I had a little laundry room darkroom set up in my future wife’s Los Feliz bungalow. I printed thirty of the LOWLIFE pictures as small horizontal images on vertical sheets of 8 x 10 Kodak Ektalure paper. In 1990 I took them around to galleries and museums without success. A big-deal photography gallery guy told me they’re great pictures but I need to get famous first. I boxed the prints and put them away and then brought them out again a couple of months ago. They’re vintage and unique and they’re going to look very cool on the gallery wall.