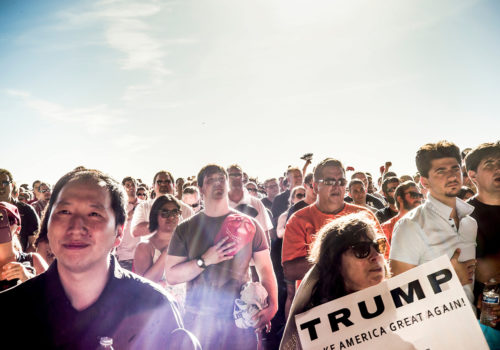 From a dingy motel room in the swing state of Michigan, to the Oval Office, BRINK chronicles dynamics that unfolded during the 2016 presidential election and led, finally, to the insurrection at the U.S. Capitol in January 2021. Photographer David Butow moved from the San Francisco Bay Area to Washington, D.C. in 2017 to document what he knew would be a chaotic time in U.S. politics. “While I expected the incompetence, I underestimated the treachery,” he says in the book’s Endnotes.

The visual narrative is presented in three ‘acts’ to highlight the histrionic sequence of events. Act I begins with photographs made shortly before the 2016 presidential election, focusing on ordinary Americans in battleground states in the U.S. Midwest, a combination of rural areas and Rust Belt towns where many voters were drawn to Trump’s nativist and anti-establishment message. Butow notes, “They reflect the part of America that is often the pivot point in national elections and one that has not fared well in the country’s economic and cultural shift toward the coasts.”

Act II moves to Washington, D.C. capturing the chaotic atmosphere within the political machine. Scenes from the White House and the Comey, Mueller, and impeachment hearings are treated almost as if they have taken place on stage or a movie set. The photographer has pulled back and shot wider than most news photographs giving more context and information to future historians, or anyone interested in what this period of time looked and felt like.

Act III begins in 2020 and shows the nearly unfathomable trifecta of the COVID-19 crisis reaching the halls of power, George Floyd protests at the gates of the White House, and finally, the attempt to overturn the 2020 presidential election when the president’s mob stormed the Capitol on January 6, 2021.

In her Epilogue for the book, political scientist Cecilia Emma Sottilotta writes that the images “shed light on the hopes and fears of a country in the midst of a deep existential crisis, where irreconcilable narratives collide and battle for the hearts and minds of people. Rather than providing answers, this book conveys strong emotions, while implicitly confronting the reader with heart- wrenching but absolutely necessary questions.”

Sottilotta continues, “Will the country be able to overcome the extreme polarization afflicting its politics and create a new, shared vision of the future? … What is certain is that, just like any other society that prides itself on being free, the US cannot afford to take democracy for granted. Not anymore at least.”

Political advisor Mark McKinnon writes in the book’s Foreword, “David was on the front lines of this unprecedented era and has produced an archive of unflinching, often shocking evidence of the period we all lived through but often find difficult to remember or believe.”

Butow concludes, “Why make a book of photographs from events that overwhelmed many of us in the last four years? We lived through history minute by minute, so much so that the gravitas of what transpired is apparent only when you step back and see how the whole saga unfolded. As revisionists seek to trivialize or downplay the events of 2016-21, it’s critical to maintain a record of just how close the presidency of Donald Trump brought U.S. democracy to the brink of collapse.”

“Brink will go down as an essential photographic document of a most unusual time in U.S. politics.” — Kenneth Dickerman, The Washington Post

David Butow has been a professional photojournalist since the 1980’s. His pictures have appeared in many publications around the world including National Geographic, TIME and Paris Match. His past work includes the 1992 Los Angeles Riots, the 2003 invasion of Iraq, and the 2019 democracy demonstrations in Hong Kong. He has worked in dozens of countries and received awards from World Press Photo, Pictures of the Year International, Communications Arts and others.