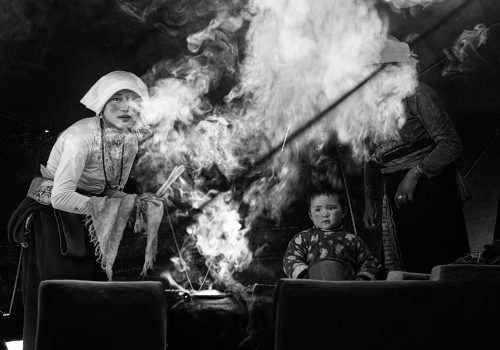 The judges also presented a special award to Monika Bulaj (Poland) for her project, Broken Songlines / Three Manuscripts.  Sponsored by The Philip and Edith Leonian Foundation, the $2,500 award is presented to Smith Grant finalists whose works the judges deemed as “exceptional and worthy of recognition.”

A journey from China to Europe, an opposite Marco Polo, accompanied by three ancient manuscripts: a Buddhist, a Sufi and a Nestorian one. The project concerns minorities fleeing persecution, nomads and pilgrims. These subjects inhabit an obscure present, a present of conflicts, broken frontiers and devastated countries. Under our eyes the richness of complexity is disappearing, in lands where many diverse peoples have cohabited and interacted for thousands of years, sharing saints, gestures, symbols, myths, songs and gods. I would like to create a kind of visual atlas of threatened minorities and shared holy places, documenting ancient rituals that risk being censored or suppressed, such that many may disappear forever.

I look for the solidarity of the oppressed. The cohabitation among the religious where there are bombs. For the cracks in the theories of the so-called clash of civilizations, there where the gods appear in a war between each other, evoked by presidents, bandits and terrorists.

The three manuscripts of the past create an eco-chamber to those persecuted today.

I have investigated for three decades popular religions in areas which have now become the hatchery of fundamentalism in the Middle East, Africa and Asia documenting beliefs and life of the weaker and the persecuted, their fragile and defenseless resistance, their openness to dialogue and to coming together.

]Showing these realities undermines the stereotypes, lightens up the imagination, instils doubts and curiosity, shows the asset that is diversity while revealing the uniqueness which we no longer are able to recognize, as we have become accustomed to the myth of the conflict between cultures and people, fostered not only by the our media but also by the extremists themselves and the Europe itself, shipwrecking once again – as my two homeland, Poland and Italy – towards the extreme drifts with xenophobia imprint.

For this reason, it is crucial to talk today about diversity, against the imperative of “purity”, keyword of all those ideologies which have led to exterminations, pseudo-religious or racial.

I would like this work to reach a vast public, young and heterogeneous. It’s a multimedia research, in different languages: photography and written reportage; sounds, interviews and music; films and theatre; and on different platforms.

It’s also a multidisciplinary research which is made up of the humanistic photo reportage, journalism, cultural and visual anthropology, historical studies.