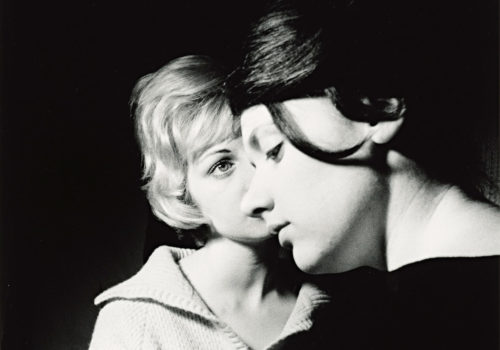 At the age of 19 Sue Ford was one of only two women enrolled in the photography course at the Royal Melbourne Institute of Technology (RMIT). It was 1962 and in Melbourne the social and political rumblings of that decade were only rumours of what was to come. Conservatism was the order of the day.

Ford braved the male dominated photography world keen to learn about the medium that had captured her imagination. Even though sexual harassment by a male lecturer caused her to cut her studies short, a revelation she made in an interview in 1995, her indomitable spirit paved the way for other women, in both artistic and social contexts.

“Sue was one of the first women photographers to establish herself as an independent practitioner and from the beginning she saw herself as a photographic artist, not a commercial photographer,” said Maggie Finch, who is the curator of the Sue Ford Retrospective at the National Gallery of Victoria (NGV). “She was quite defiant about that.”

Following RMIT Ford opened a photographic studio in Little Collins Street in the centre of Melbourne with her friend Annette Stephens, who said, “(Ford) had to be very single-minded as a woman to keep on doing what she did.” The studio was above a café whose owner was convinced it was a front for a brothel. Ford grew tired of the tirade that would follow each time a man walked up the stairwell and so she began photographing her female friends as well as turning the camera on herself. Ford is considered one of the most prolific self-chroniclers.

“In a way I think her feminist working method developed almost out of necessity,” said Finch who marvels at the trials Ford went through because of her gender. “Her early works were very collaborative. There is a real sense of camaraderie and the consensual nature of the images. The way Sue worked – with friends and other women – created such a different dynamic to the more formal work of the male photographers who were often working with professional models to a very particular aesthetic.”

The collaborative approach that evolved in the early years of her practice became a hallmark. As more women came onto the photography scene Ford enthusiastically shared her knowledge and experiences. “Sue was incredibly generous and very inclusive,” said close friend Bonita Ely, now an Associate Professor of Fine Arts at Sydney’s University of New South Wales. “There was a lot of creative activity at that time and Sue was a wonderful collaborator. She was always full of ideas and concerned with women’s roles and identities, although this was not her exclusive focus and she very much engaged with both genders”.

But it was experimentation that really defined Ford’s philosophy and she constantly embraced new technologies in order to push creative boundaries. Her camera was an extension of her being, always within reach. Another of Ford’s inner circle, Helen Ennis, who is today a professor at the Australian National University School of Art in Canberra, said Ford is crucial to the history of Australian photography. “At that point in Australian photographic history there were very few women who were very visible or active. I see Sue as being absolutely crucial for a history of photography. She is one of those figures who really begins to put art photography on the map”.

In the early 1970s Ford received a scholarship to study at the Victorian College of the Arts (VCA) where she left behind the technical training she’d received at RMIT and began to focus more on the image itself. It is this shift in adherence to technical mores that photographer Ruth Maddison said really impacted her own work. “Her approach was ‘I don’t care if the print is scratched or if there’s dust on it, it is all about the image’. She was validating the fact that sometimes you love the image, but the print might not be fab…that allowed me to relax”.

Ford was not precious about photography per se experimenting with other media also including the moving image. Ford’s 1972 short film “Woman in a House” is representative of one of her earliest forays into multimedia. Here she combines the darkroom techniques of multiple negatives, multiple exposures and mirroring to tell the story of a young married woman who is desperately trying to escape her situation. At the time Ford was recently separated, and she drew on the personal to inform the story.

Political and environmental issues also influenced her choices. In 1969 she created “Bush Performance Montage”, which featured a male friend wearing a gas mask. In this image Finch said Ford “created a dystopian landscape” using multiple negatives of the bush and Melbourne’s CBD to create an apocalyptic portrayal of the environmental degradation she saw happening at that time.

In her collage “Vietnam the Six O’Clock News” Ford airs her concerns around the horrific media representation of the Vietnam War. In this piece Ford photographed an image off the TV screen  of a bloodied Vietnamese civilian and physically collaged it with a photograph of a suburban Australian house. The technique of photographing images that were screened on  television appears at various periods throughout her oeuvre.

But it is Ford’s Time Series that is considered one of the groundbreaking moments in Australian photography. Melbourne photographer Ponch Hawkes said Ford was an inspiration and led the way particularly with this series. “I think Sue introduced the notion of the series in Australia. You can see it in American photography, but no one was doing that here…that really changed things. Suddenly the subject matter of our own lives was appropriate for photography. I think that series really influenced everybody…and it made my Mothers and Daughters series possible”.

In 1974 Ford was the first Australian photographer given a solo exhibition at the NGV for the Time Series, which featured two black and white portraits of the same person taken ten years apart, and hung side by side. In her artist’s statement for the exhibition Ford said, “For some time I have been thinking about the camera itself. Trying to explore its particular UNIQUENESS, coming to terms with the fact that I had been trying to ignore for some years, that the camera is actually a MACHINE… Man seems to misuse his machines continuously, with disastrous results for this century. In ‘Time Series’ I tried to use the camera as objectively as possible…the camera showed me with absolute clarity, something I could only just perceive with my naked eye”.

Throughout Ford’s career she continued to expand her frame of reference, yet there was always a political edge to her work. In the lead up to Australia’s bicentenary in 1988, she became immersed in Australian histories, revisiting concepts of Australian identity and exploring connections to the indigenous culture.

That year she attended three events that were to shape her exhibition “A Different Landscape”; the Aboriginal Barunga Festival of culture and sports where the Australian Prime Minister at the time, Bob Hawke, and Aboriginal Affairs Minister Gerry Hand, made an historic visit meeting with senior Aboriginal men to discuss a proposed treaty; the teaching of photography to a group of Tiwi women living on Bathurst Island, which is part of the Tiwi Islands off the coastline of Australia’s Northern Territory; and documenting the National Aborigines and Islanders Day Observance Committee (NAIDOC) Week in Melbourne.

Ford’s images contribute to the political record of the time, and also mark the significance of these events on the Australian psyche and on Ford herself. According to Finch, towards the end of her life Ford nominated the photograph she took in 1988 at the end of the day at the Barunga Festival of the Lajamanu women dancing ’Yawulu‘ as one of the most significant images in her entire archive.

In 2009 Ford died at the age of 66. “Right to the end she was working,” said Ennis. “She never stopped thinking about her practice. She was a really creative, open and inspiring person. I feel very lucky to have known her”.