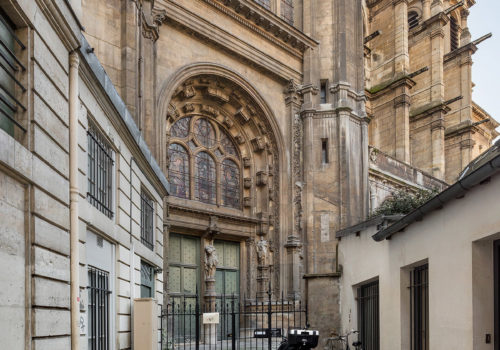 Paris has over 600 dead end streets, pedestrian streets, mews, villas and squares. Paris is the most populous city in Europe, with more than 20,000 inhabitants per square kilometer.

The Paris Impasse photo book shows more than 200 dead ends, from the 1st to the 20th arrondissements. The photos offer a view of Paris that is normally not noticed. This book takes you into a sort of labyrinth where you always have to turn around and retrace your steps.

Photographer Karin Borghouts began photographing the pedestrian streets of Paris in 2011. During her walks, she experienced the vastness of this city and loved to be surprised by what she encountered. During a period as an artist in residence, she photographed hundreds of dead ends. Characteristic detail: people do not appear in her photographs.

In 2019, she took the initiative, with graphic designer Jean-Michel Meyers, to transform this visual experience into a book. The prototype (or dummy) was nominated for the Luma Rencontres Dummy Book Award at the Rencontres de la photographie in Arles, France, the most important photo festival in Europe.

In a pedestrian street, you should only be there when you live, work or visit. A dead end is a place of peace and quiet in the city. You are on public land, but often you have the impression that it is private. Plants are installed outside, sometimes tables and chairs, but also  clutter and often cars, mopeds and bicycles find a parking space. Often the alley is simply empty.

Photos are records of time, but reality is constantly changing. Besides visual research, this book is also a document for the future and an invitation to discover dead ends for yourself.

The book was published by Snoeck Publishers in November 2020 and distributed in France in March 2021.

Karin Borghouts (Kapellen Belgium, 1959) studied painting and sculpture. After working as a graphic designer, she discovered a vocation as a photographer and integrated these other disciplines into her photography. She is best known for her photographs of buildings and interiors, sites in public space and museums, which present themselves as a scene in which the human figure is absent.

She works on her own projects and carries out various missions for museums, cultural institutions, public authorities, architects and publishers. Among her artistic projects, we will remember above all The House, in which she portrayed the charred interiors of the house of her childhood, carried away by the flames. In 2005, she received the prestigious European Eyes on Japan commission. In 2012-2013 she was photographer for the city of Antwerp. From 2011, she also photographed the renovation of the Royal Museum of Fine Arts in Antwerp.

She has to her credit numerous exhibitions in Belgium and abroad, both solo and in group, as well as various publications such as The house (of my childhood burned down and I went in to take pictures,  Mijn huis dat was, Antwerpen Stad verbeeld et Vincent was here,. Her works can be found in particular in the collection of the photography museums of Antwerp and Charleroi, at the MAS museum in Antwerp and STAM in Ghent, as well as in the collection of works of art by Proximus and the University of Antwerp.

Purchase of a signed book, with a set of 6 postcards, special editions and prints via www.karinborghouts.be/shop