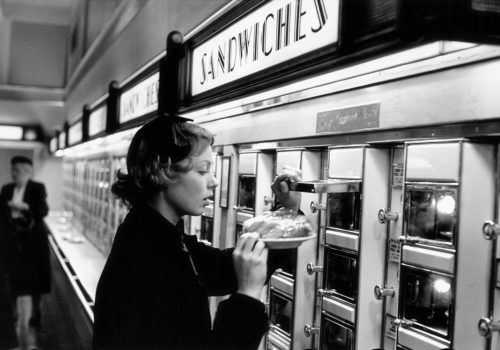 “In my nineties, my work looks different than I’ve ever seen it before… There’s a time for pictures that say hello, and there’s a time to listen.” – Elliott Erwitt

Over 170 previously unseen images by photographer Elliott Erwitt will be published for the first time in Found, Not Lost. Spanning more than sixty years, the photographs in the book, often taken during lulls or breaks between assignments in his prolific career, have been selected, edited and sequenced by Erwitt himself.

Now in his 90s, Erwitt began the process of revisiting his archives in 2018 after his first retrospective, Home Around The World, when faced with the burden and responsibility of being custodian of his own archives and all they contain. Here began the exhaustive process of reviewing every photograph in his studio. Over the course of nearly two years, with the help of editor Stuart Smith and long-time studio manager Mio Nakamura, he viewed around 600,000 images—contact sheets and negatives—from those developed in his bathroom sink at home at the age of seventeen to those from recent assignments in Scotland and Cuba.

The sea of imagery dominated every flat surface for months.

This book has been an opportunity for Erwitt to revisit the photographs he made in his early career and to uncover meaning upon second glance which was not apparent when the image was originally taken. The master of visual one-liners—bold statement images replete with humour, irony and acknowledged absurdity—the photographs selected for this book are quieter, more subtle and suggest Erwitt’s increasing confidence in his own eye. By selecting these photographs he has begun to both examine and challenge how his younger self saw the world.

“Here, in this book, are pictures that Elliott wants us to see. They’ve been in the dark, undisturbed, unremarked, for decades. Now he’s brought them into the light. If they were ever useless, or not.” – Vaughn Wallace

The earliest image in the book was taken in 1947 and the most recent in 2010. From post- war Europe to the former USSR, from the West Coast to the East Coast of the US to Japan, Brazil and Birmingham—the images contain some familiar themes of dogs, children and delight. However, many are more photojournalistic showing historic moments, and others intensely personal such as photographs of his first wife, Lucienne Van Kan and his first-born daughter, Ellen.

Born in Paris in 1928 to Russian parents, Erwitt spent his childhood in Milan, before emigrating to the US with his family in 1939. As a teenager living in Hollywood, he developed an interest in photography and worked in a commercial darkroom before experimenting with photography at Los Angeles City College. In 1948 he moved to New York and exchanged janitorial work for film classes at the New School for Social Research. In 1951 he was drafted for military service and undertook various photographic duties while serving in a unit of the Army Signal Corps in Germany and France. While in New York, Erwitt met Edward Steichen, Robert Capa and Roy Stryker. In 1953 Erwitt joined Magnum Photos and worked as a freelance photographer for Collier’s, Look, Life, Holiday and other luminaries in that golden period for illustrated magazines. In the late 1960s Erwitt served as Magnum’s president for three years. He then turned to film: in the 1970s he produced several noted documentaries and in the 1980s eighteen comedy films for Home Box Office.