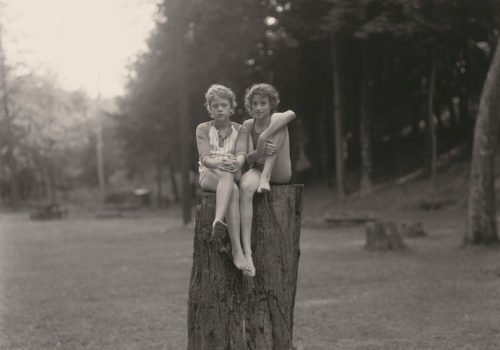 With the current exhibition the MAPFRE Foundation presents the largest retrospective to date of photographer Judith Joy Ross (Hazleton, Pennsylvania, 1946). The exhibit explores the artist’s photographic archive developed over the past 40 years. During her career the artist has principally focused on portraits, intent on seeing the complexity of who her subjects are rather than a projection of who they might otherwise be.

In 1966, Judith Joy Ross began to photograph people in her city as a way to understand the emotional lives of those around her. In this sense, one can say that the artists discovers her photographic subjects in the world.

Ross method of working usually consists in what the photographer herself calls “occasions,” and what the art historian Svetlana Alpers in her catalogue essay calls “campaigns” on selected subjects, among them: children and adolescents at Eurana Park in Weatherly, Pennsylvania, visitors to the Vietnam Veterans Memorial in Washington, D.C., members of the United States Congress during the Iran-Contra affair, public school students in Hazleton, Pennsylvania or specific places like Easton, also in Pennsylvania, the state where Ross was born and raised and where she continues to live.

The exhibition, comprised of 200 photographs as well as archival materials, unfolds chronologically over nine sections that chart a wide panorama of the artist’s key projects. It also includes a considerable number of previously unpublished works and individual photographs independent of Ross’s principal series. All of the photographs come from the artist’s personal archive.

In the early 1980s, Ross acquired an 8×10-inch view camera, whose deliberateness allowed her to engage her subjects both intimately and at a remove. She sees her portraits as a kind of collaboration: each sheet of exposed film memorializes a moment in an essentially fleeting, wordless exchange with a stranger. “Both of us together—we make the picture,” Ross has said. “They’re giving me, I’m getting. I’m encouraging them, they give me more. We both might actually be in love for a few seconds. I’ll never see them again.”

Without sentimentality or prejudice, Judith Joy Ross makes portraits as a way to understand the emotional truths of the people she encounters. Ross does not work in a studio, but in the street, in parks and other public spaces.

Following its closing in Madrid, the exhibition will be shown at LE BAL (Paris), from February to May 2022 and at Fotomuseum Den Haag (The Hague), from November 2022 to March 2023.