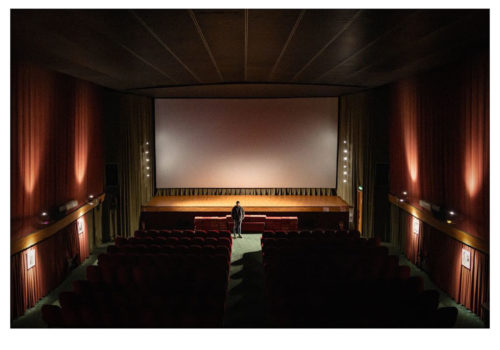 Cinema has always been Morris Donini’s dream. Everyone knows and loves him as Morris the “cinemaio”, the artisan of the cinema. In this year of forced closure due to the pandemic, he decides to keep showing movies in an empty theater. In the darkness of his cinema, Morris sits on an armchair, as he used to do during normal days, enjoying lights and atmospheres. He keeps the doors open to allow the inhabitants of the small town to hear the voices and the music of the stories projected, while flashes of light come out as reflections that send a message: cinema exists, the show goes on.

Resilience is also and mostly this: Morris and sometimes his dog, as a sole spectator in a moment of great difficulty, with closed cinemas but with rents to be payed, with strength and determination, hoping that lights won’t switch off forever. He drew movie theaters on his notebooks since he was a child, including advertising and movie reviews. It happened he met the owner of a cinema in a small town in the district of Bologna (northern Italy) and from that day Morris kept asking him to be part of that world so that he could live the ambience of the movie theatre, including its red velvet fabrics, its armchair and the magic screen. When the owner died, Morris have been asked to manage that cinema and he accepted without thinking twice. Morris was 29 years old at that time. Today, 20 years after, he manages 3 cinemas in a small towns located in the district of Bologna. He pays particular attention to quality movies, he has a great sense of welcoming his audience, accompanying the film with aperitif and theme evening. Cinema considered home, meeting place and exchange of views.

In Italy, cinema business has undergone a drastic reduction of more then 70% in terms of presences and incomes, causing an estimated loss of more than 25 million spectators: a collapse that has never been seen or even hypothesized since the birth of this sector which today is an industry.